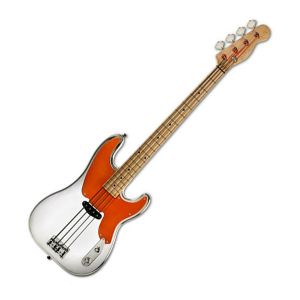 This 50's precision model bass guitar was made by Noah Guitars, an Italian guitar manufacturer from Milan. It's special in that it has a hollow body made from aluminium. Around 2018-2019, the guitar has been rebranded as "Noah Classic Bass" and features a slightly modified shape of the headstock.

After purchasing it in a guitar store in Italy in 2009, Wolstenholme was first shown using it in the video for Uprising, though in "The Making of Uprising" video, the second video from the " Join the Resistance" campaign, he is shown to have recorded the song using a Fender Jazz Bass.

Chris only used it during The Resistance tour, until 2010, when it's duties have gone to the Status's The KingBass Mk-II and S2-Classic basses. Despite that, he still appears to own the guitar, as it was seen in a 2015 Instagram picture of his guitar collection.

For touring, the bass appears to have been kept stock with a larger chrome thumb rest installed additionally at the bridge.

Go back to bass