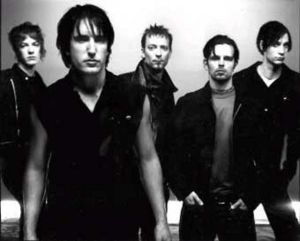 One of the big industrial rock bands of the day, with the only member being frontman Trent Reznor (others perform with him live). Muse have discussed their fondness of the band, and selected NIN's video, "Closer," to be on the episode of "Rage" they hosted.

Notable live members include Robin Finck, Josh Freese, and Alessandro Cortini, who filled in for Morgan Nicholls for part of the 2009 tour.