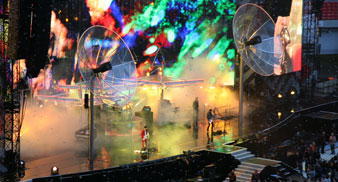 Muse have performed two nights of epic two-hour sets this weekend, June 16 and 17, as the first band to play at the brand new Wembley Stadium.

As the biggest shows the trio have performed in their lives, Muse brought with them a stage show that included giant satellite dishes, fluorescent lights, giant UV inflatable balls and massive projection screens. The futuristic show on Saturday kicked off with Matt Ballamy, Chris Wolstenhome and Dominic Howard appearing in a burst of glitter in the middle of the crowd, flanked by a parade of men dressed in yellow biohazard suits, adding to the alien theme.

Opening track 'Knights Of Cydonia' was a trundling film soundtrack-esque success, before the glory of the mass singalong 'Hysteria.'

The shiny and enormous new Stadium could easily have swamped the group, but plenty of audience engagement made sure that didn't happen. Bellamy spoke throughout, introducing songs, and asking "How are you doing at the back? I hope you see us! This one is for you."

They played tracks from all four albums, each song slotting in seemlessly from 'City Of Delusion' and 'Map Of The Problematique' to 'Butterflies & Hurricanes' and 'Sunburn.'

'Feeling Good,' the 1965 Newley song made famous by Nina Simone, sounded great- belted out by Bellamy on his glass-topped grand piano, with the crowd singing along with it in football terrace style vigour.

For Muse's first encore, they returned with a song for "unsung heroes" with 'Soldier's Poem' - the stadium filled with held up mobile phone lights, like candles.

And then the acrobats came, dressed in white leotards and hanging descended from the giant UV balls which had been sitting up behind the stage, until they floated on down to fix themselves above the heads of the crowd on the ground. The transfixing gymnasts performed in slow motion as the band played out a slow eerie version of 'Blackout.'

A resoundingly great version of Beethoven on electric guitar sounding 2001 hit single 'Plug In Baby' then brought the show to a brilliant climax, as the stage goes black and the band left the stage.

They were only teasing, and return for a second encore of 'Micro Cuts,' 'Stockholm Syndrome' and final closer 'Take A Bow' which came complete with pyrotechnic giant flames shooting out into the crowd.

Bellamy beamed gratitude to the audience: "Thanks you guys have been fantastic. And thanks for making us the first artists to sell out Wembley-fucking-Stadium!"