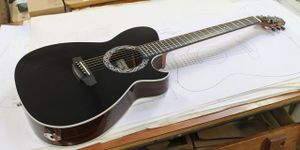 After working on new Acoustic material, Matt decided it was time to have a custom Manson acoustic guitar designed for him based on the "Mattocaster" Shape. It was designed and built by Hugh Manson's brother, Andy, a specialist in acoustic design.

In 2019, Matt got two new guitars built for back-up purposes.

The Manson Acoustic got it's first live outing at the Perfect Vodka Amphitheatre gig in 2017, and was only used for Undisclosed Desires during that year.

Later, in 2018, with the release of Simulation Theory, this guitar was used for live performances of Something Human and a performance of Dig Down's Acoustic Gospel version at the Jools Holland Show.

With the start of the Simulation Theory World Tour in 2019, the guitar was only used for Propaganda, as the band dropped Something Human from tour sets and Dig Down's acoustic version features Matt on a piano.