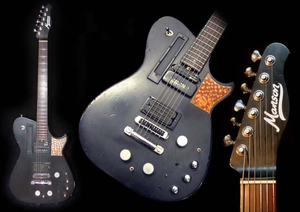 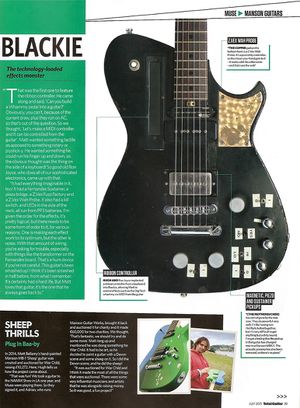 One of the first custom Manson guitars built for Matt.

Hugh Manson on the Manson 007

"Matt came to me and said, ‘Can you build a guitar with a whammy pedal in it?’ I thought for moment and said, ‘Of course we can‘. Then I looked at the back of a whammy pedal and realised it draws a lot of power. Unless he wanted a guitar full of batteries that he could only use for 40 seconds, it wasn't gonna work. Then I realised the modern whammy has a MIDI controller system with it, so I went to a great friend of mine, Ron Joyce, who does all my weird electronic stuff, and said, ‘I want to control that pedal from this guitar’. He said, All you need is a pot. I looked in to pots but realised that rotary pots gave the wrong feel. Eventually we came up with the linear pot from the side of a keyboard, which acts as a MIDI controller pad and goes in to a microprocessor to control the whammy. It just number crunches MIDI numbers -you tell it what you want it to do and it'll do it. It'll control a whammy pedal, it'll control a kaoss pad, it'll turn the lights up and down, it'll turn your heated blanket on, whatever you want in terms of MIDI. I don't think anyone's done that in a guitar before."

This guitar is featured on the "Time Is Running Out" music video. Although this guitar is officially named as "007", Matt calls it "Black Ed" (as he tells in the July's 2010 Guitar Player magazine). But to fans it is most known as the "Black Manson" or "Blackie". It is the first of Matt's Manson guitars to be fitted with a Fernandes Sustainer.

On the Absolution Tour DVD, there is a short clip of Muse playing in a small bar in America using this guitar for Stockholm Syndrome. After it, Bellamy walks outside while still playing and throws this guitar in the trash dumpster. A guy then takes it but Bellamy got it back later. In one interview, Matt said after throwing the guitar away and going back to the bus, he thought about it and regretted it because it was one of his favourite guitars and thought he was not going to get it back. When asked why he threw it away, he said it was because it was making a "racket".

In an interview with Guitar Player (July 2010) magazine, Matt explained that he does not use this guitar live very much due to it's weight and the fact that it's much louder than his other guitars. "The one I used the most on The Resistance is called “Black Ed.” It has a really amazing tone, but it’s extremely heavy, and it’s also louder than all of my other guitars, so it doesn’t quite work for performing live. It has a few gizmos in it, as well—a Z.Vex Wah Probe, a Z.Vex Fuzz Factory, and an MXR Phase 90." He also mentioned in a 2020 interview with Musicradar that he almost broke it and then ditched it from live use, saying "I threw it across the stage and it nearly broke and I got scared and never played it again on stage".

Although it has been retired from live use, this guitar has been seen used extensively in the studio. In the Making of The 2nd Law DVD, it is seen in use during Panic Station and Unsustainable. According to Bellamy, he has used it while recording practically every album since OoS, allthough, due to lack of photos, it is unknown exactly on which songs he has used it on in the studio.