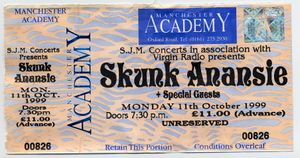 A setlist is known, but it is unknown if it is the complete gig; other songs may have possibly been played.[2]

A review [3] of the gig states that the opening act, Muse "are not as immediate, which might explain why they go down only moderately well". Also that their "emotional rock classicism and inventive musicianship beg more than one hearing". The reviewer also refers to the neverending Radiohead comparisions "insert Radiohead comparison here, for the rest of the band's career". Lastly he states, "repeated exposure will see them become many people's angst rockers of choice".