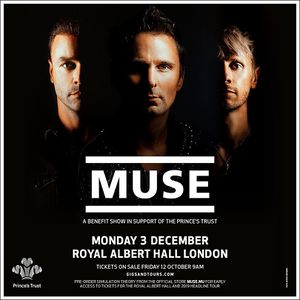 Muse will perform at the Royal Albert Hall in London in support of The Prince’s Trust charity on Monday 3 December. It was announced by the band on 3rd October. The tickets will be on sale the 12th October. Tickets were limited to two per person. Ticket resale was limited through Twickets, a fan-to-fan ticket resale platform.

Omaze is holding a sweepstakes competition for The Prince's Trust charity where you can win VIP tickets to the concert, which include the band dedicating a song just to the winner, private tour of the venue and taking a photo together. Flights and 4-star hotel included. The dedicated song was Uprising. Algorithm was soundchecked.

The crowd sang "Happy Birthday" to Chris before Showbiz.

This concert marked the first live performances of Algorithm, Break It To Me and the famous Heavy Rock Songs Medley that Muse talked about a few times in some interviews. It was also the first performance of Reapers since 2016 to go beyond the intro/outro.