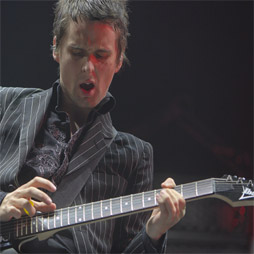 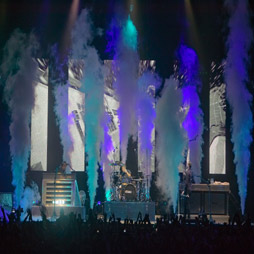 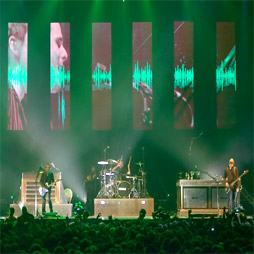 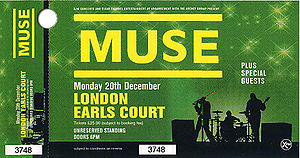 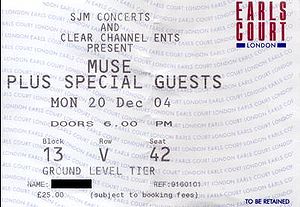 The concert was announced on the 21st of October,[3] the reason citing "unbelievable" demand for the previous night's pre-sale.[3] General sale started on the 23rd October 2004 at 09:00.[3] More tickets were put on sale on the 19th of November at 09:00 through gigsandtours.com.[4]

This was the 'black jacket' gig and featured a set-list slightly different from the night before.

Dominic Howard and Christopher Wolstenholme opened up the gig, while Matthew Bellamy ran around backstage with a camera (as he did the previous night).[source?] However, this time Matthew Bellamy had a monkey hand puppet on which he danced around on camera.[source?]

After The Small Print, Bellamy broke the Ibanez guitar he was playing, picked it up, walked to the edge of the stage and threw his guitar into the audience.[source?] The Micro Cuts ending slowed down to an almost complete stop. Thomas Kirk said that Blackout "was fucking ace", in response to the question "how cool was blackout! ;)".[5]

Last performance of The Small Print in the UK.

The Small Print and Stockholm Syndrome feature on the Absolution Tour DVD.

Butterflies & Hurricanes and Ruled by Secrecy from this concert were the first videos released of the two nights, along with The Small Print from the day before - these were put on Muse.mu. XFM broadcast the gig[6][7] in its entirety aside from Glorious, which was replaced by a recording of Dead Star from the previous night. A recording of this broadcast can be found in Muselive.com's media section. This recording contains extensive artefacting and low lowpass. An audience bootleg was also made.