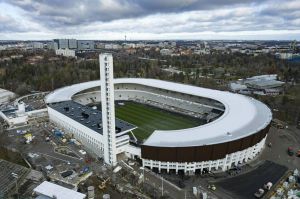 The Helsingin Olympiastadion (Helsinki Olympic Stadium) is a sports stadium, located in the Töölö district of Helsinki, in Finland. Designed by Yrjö Lindegren and Toivo Jäntti, the stadium is the largest in the country and opened in 1938 with the intent of hosting the 1940 Olympic Games which were moved over to Tokyo before being cancelled due to WWII. The stadium was renovated several times, it was modernized between 1990 and 1994 and underwent another major renovation in 2016, where restaurant areas were extended and field and track areas renewed, amongst other improovements. The stadium's former capacity was 42,062, but has been brought down to 36,000 after the 2018 and 2019 renovations, which also included all stands of the stadium being covered in roof. It is owned by Stadion-säätiö.

The Olympiastadion is the home to Finnish national football team. It's first major event were the 1952 Summer Olympics, where it hosted athletics equestrian show jumping and football. In 1957, it hosted the first Bandy World Championship, while in 1983 and 2005, it hosted the World Athletics Championships. The stadium also hosted the European Athletics Championships in 1971, 1994 and 2012. In 2009, it hosted the UEFA Women's Euro football cup. The stadium is planned to host the 2022 UEFA Super Cup. Musical artists who have performed at the stadium include The Rolling Stones (who performed at the venue a total of six times, with the first gig being back in 1970), Dire Straits, Michael Jackson U2, AC/DC, Paul McCartney, Genesis, Metallica, Bruce Springsteen, Tina Turner and more.