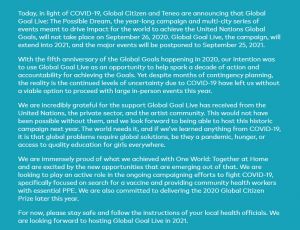 Special show in support of The Global Goals, organised by Global Citizen. Second of the two planned gigs for 2020. Due to the coronavirus pandemic, this gig is planned to take place in 2021.

Announced by Global Citizen exactly one year before the planned date. Muse are set to be one of the headliners of the 2020 Global Citizen festival called Global Goal Live: The Possible Dream. The festival is going to be organised the same way as Live Aid and Live 8 were in 1985 and 2004, taking place in five of the World's continents and broadcasted live from North America (New York City), Africa (Lagos), Asia (Seoul), Dubai, Europe (Berlin) and Latin America (TBA). According to Declan Kelly, CEO of Teneo and one of the organisers, the event would be "the largest event of scale ever held in human history". Other acts who will perform at the festival include Metallica, Ozzy Osbourne, Queen, Billie Eilish, Lizzo, Coldplay and more. The concerts will be hosted by Deborra-Lee Furness, Hugh Jackman, Idris Elba, Jill Vedder, Trevor Noah and Katie Holmes.

In May of 2020, Global Citizen announced that all major events will be postponed until September 25th, 2021.[4] The European event, where Muse were set to play, was supposed to take place in Berlin, Germany.[5]

Tickets to the various concerts are free*, but attendees must take a series of actions to create lasting change around the world, via the Global Citizen app. Winners will be drawn and granted two tickets.

Note: There will be a small amount of VIP tickets on sale that can be purchased without the criteria above.