Difference between revisions of "Fernandes Sustainer" 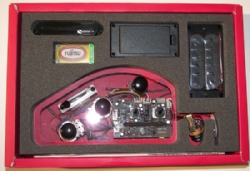 Produced by Fernandes Guitars, the Fernandes Sustainer is an electromagnetic driver/pickup, designed to vibrate the strings of a guitar indefinitely, giving the effect of infinite sustain, or simulating amp feedback. Since 2006, this pickup has been included on a number of Bellamy's guitars, and is most notably used during the slide intro for Invincible. Another artist known for using the Sustainer is Steve Vai.

The Sustainer is installed instead of the usual neck pickup on the guitar, and comes in two variants; the humbucker-sized FSK 101 and the single-coil-sized FSK-401. The two are almost identical in function, with two modes; A "normal" mode, that causes the root note to sustain, and a "harmonic" mode, that makes the string resonate at the fifth natural harmonic of the root note. The 401 also has a "mix" mode, that blends the other two modes, and an intensity control knob.

The pickup behaves the same way as an EBow does, but the latter one is handheld and thus harder to control, especially when moving strings. As of 2016, all of Bellamy's guitars come with a Sustainiac Infinite Sustain System instead of the Fernandes Sustainer. The Sustainiac is exactly the same as the Sustainer but it's made by another company and the pickup has a more modern sound.