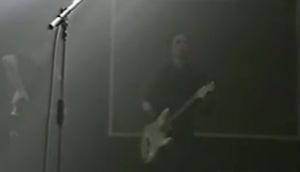 Matt with the white Stratocaster during rehearsals in Kyoto, Japan, 2001

This Stratocaster was seen being played by Matt in Osaka, Kyoto Japan, in 2001.

It was also seen in the Japan Origin of Symmetry premier gigs DVD, where it was used in rehearsals for Unintended 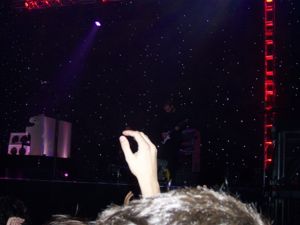 Chris during Hoodoo at the Lisbon gig with his Strat

The presumed black Fender Stratocaster with matching painted headstock and white pickguard has been used by Chris during first performances of Hoodoo in 2006, being first used in Bilbao, before he switched to the PRS.

Allthough it appears to be a Stratocaster, it has a Telecaster headstock and looks like it has different switches and knobs. It's possible this could've been a custom Manson, allthough this still remains unknown. 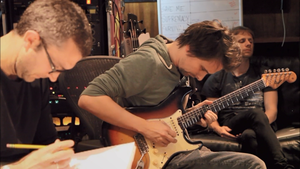 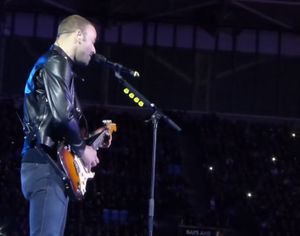 Chris with the sunburst Stratocaster

The sunburst Stratocaster was first seen during the making of The 2nd Law. It was used for recording the song Animals.

Additionally, the Sunburst Strat was also used by Chris live during the first few gigs of The Unsustainable Tour for Unintended, Blackout and for the rhythm part of Guiding Light. 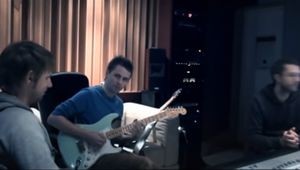 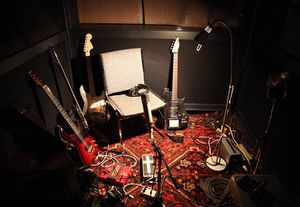 The blue Strat in the studio while recording Drones

First seen in the "Making of Uprising" pre-order download, Matt can be seen using various guitars, including the light blue Fender Stratocaster, to play the guitar break; however, the Stratocaster is not the guitar featured on the final track.

The light blue Stratocaster has been seen once again used while recording Drones and was used on Defector and The Globalist, and possibly a couple other songs aswell.