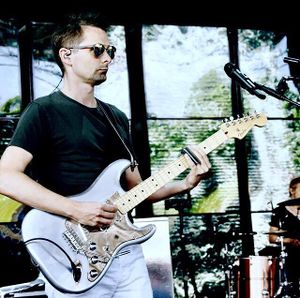 It is very likely that this guitar is a Fender Custom Shop model. It is very similar to the Custom Shop Master Built [Hydroform Stratocaster] built by Scott Buehl, allthough Matt's guitar has a chrome pickguard.

Similar to his Manson’s guitars, it’s probable that there are 2 Rigs for touring certain parts of the world, there are likely 2 models of this guitar. The original Ali Mirror Strat used on the Psycho Tour and Drones World Tour featured a larger Headstock, it’s possible that there is a duplicate guitar or the neck was replaced at some point.

The Aluminium Strat has also been seen in the studio during the making of Simulation Theory. It was likely used on Break It to Me due to the distinct neck pick up sound, and a couple other songs off of the album.

Matthew Bellamy first used this Fender Stratocaster extensively on the Psycho UK Tour and the Psycho US Tour in early 2015, debuting live in Belfast. After a period of assumed inactivity, this guitar returned to the stage for the The Drones World Tour 2015/16, with the low E string tuned down to A for The Globalist on which it was used to it's last performance in 2017

The Aluminium Strat was marked "6" by Matt's guitar tech.