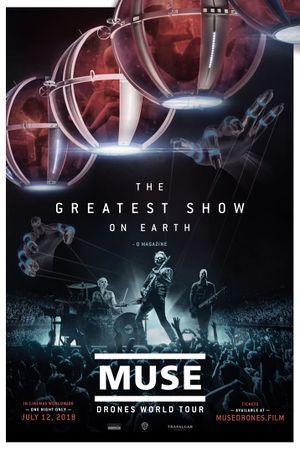 Drones World Tour is a live film featuring recordings from multiple concerts in 2016 Drones World Tour from Berlin, Milan and Amsterdam. The film includes never before seen special effects along with an exclusive insight from the band in the introduction. [2]

The movie includes an introduction with a clip of Aftermath and the band explaining the concept behind the tour.

When the movie was shown in cinemas, it included an extra bonus clip at the end of the film's credits, announcing the release of Something Human and it's music video, which came out a week later, on 19th of July 2018.[7]

In a radio interview recorded on March 5th 2016, Hans said that "you can probably expect it [album release from the movie], but you didn't get it from me". [8]

On 12th May, 2016, while Matt was on tweeting spree, he teased the idea of the film by saying that Berlin has best chance of making to the film, and that they will film footage for it in the future. [9][10]

First officially announced by Hans-Peter on 17th May, 2016 on Twitter, that 4K recordings for the film are going to happen in cooperation with Corrino Films. [11]

On October 15th, 2016, a leaked 4:44 long clip of live performance of Madness was found on Vimeo. The clip was uploaded by someone who had worked on the film, and the video has watermark over it saying "Content Media Viewing Purposes Only". The clip features simple editing.[12]

During this whole time, it is worth noting that Hans-Peter kept reassuring people on Twitter that it is still being worked on, but without giving away any additional information.[13][14][15][16][17][18]

After a year of silence on May 18th 2017, Bellamy reveals that they are still working on it.[19] While also indicating that there will be no physical release, only digital. [20]

On August 16th, 2017, Bellamy says that it has "gone down a post FX rabbit hole".[21] This is repeated again on December 10th, 2017. [22] It is possible that Corrino Films announced bankruptcy[23] on June 6th, 2018 might have something to do with the increased delay of the release in the past. There are also accusations against former chair-man of Corrino Films about punishable behavior in U.S. which includes hiring prostitutes and using them in their corporate apartment countless times, revealing confidential information about artists to said prostitutes, lying about his position in company to them, possibly using company's money to pay for prostitutes, as well as sexual intimidation against a lower rank employee.[24]

On April 26th it was finally officially announced. [26]

The film was, so far, only officially released to public in cinemas for the one night screening, and no digital or physical releases were announced yet.

The film has also gone live on 3Sat's website on 31st of December, about 12 hours before it's airing on TV, and is available for online streaming until 14th of February 2020, limited to citizens of Germany, Austria and Switzerland.

You can watch the movie here

In order of how they were shown in the films credits.