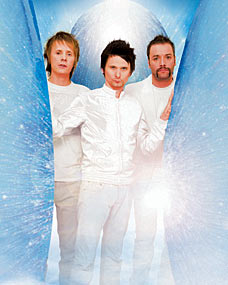 No planetoids are scheduled to collide with London the day I meet Muse. This is fortunate. Last year, singer Matt Bellamy forced his American record label to scrap an entire day of press interviews on the grounds that a giant asteroid was about to hit New York.

The journalists involved were bemused if unconvinced. They were at least flattered with the excuse – much better to cancel promotional duties due to Armageddon than hangovers.

But none of them left town. It was a typically eccentric demand from the Devonian rockers, whose on-stage performances have been compared to some of the most awe-inspiring live acts of the past three decades; think The Who at Charlton Athletic, Led Zeppelin at Knebworth, Queen at Live Aid, Nirvana at Reading.

And on this asteroid-free day, I very quickly discover exactly why they won the 2007 Brit award for Best Live Act, not to mention NME’s Band of the Year, and why they’ll be the first band to play the new Wembley Stadium. They put on one hell of a show.

Within the first 15 minutes of meeting them, I’m being asked to believe that the US Government was behind the 9/11 attacks, The Beatles were a secret plot to brainwash the youth of America, and the human race evolved as a result of visiting aliens carrying out genetic experiments on monkeys.

‘I’m a very open-minded sort of person,’ Bellamy says with considerable understatement. ‘As far back as I can remember, I’ve felt the need to question the foundations our reality is built on.

It goes back to when I was four years old and my uncle, a British Army officer, was shot dead in Belfast. The newspapers reported that he died in an IRA ambush. But no one was ever arrested and IRA involvement was never properly established.

The impact of it grew stronger as I got older. By the time I was ten, I started asking questions but nobody had answers.

‘I can’t imagine what it was like for my dad for the circumstances of his brother’s death to remain in the dark.

There were always rumours flying around that he was a member of the SAS, but that just added another layer of mystery to it all.

The whole thing had a profound effect on my life. It played a big part in my lack of trust in society and the organisations within it.’

Family tragedy notwithstanding, it has to be said that Bellamy entertains the kind of ideas that David Icke might reject as slightly fanciful.

Does it bother the singer that he’s so easily compared to the former Coventry City goalkeeper who believes the world is ruled by reptilian humanoids?

‘Not at all,’ he laughs. ‘When you start unravelling the beliefs that you’ve been living with, you can go a little bit loose in the head and you get to a point where you almost believe in anything.

You can start entertaining ideas that might seem crazy to most people. But I believe those ideas, absolutely.

‘Surely it’s more scientifically plausible to believe that aliens were involved in the evolution of man than believing that the world was created by a man with a big white beard? It’s not that far out when you stop to think about it.’

In person, 28-year-old Bellamy gives every impression of not being quite of this world. Unnaturally pale, twitchily intense, visibly uncomfortable in his own skin, and avoiding eye contact, he calls to mind David Bowie’s character in The Man Who Fell To Earth.

Much like Bowie’s alien emissary, Bellamy appears to find contact with humanity profoundly unsettling. It’s as though his willingness to embrace any madcap theory is his way of coping with a world completely incomprehensible to him. Or maybe it is his way of building a protection zone around himself.

Perhaps tellingly, when asked if he has any plans to marry his long-term girlfriend (Italian psychology student Gaia Polloni), he hums and hesitates at length, admits that he’d like to get married underwater just to see what it’s like, then veers off into a convoluted monologue about human evolution.

There’s evidence that Bellamy is not averse to playing up his dotty beliefs when it most suits his purposes, as with the asteroid stunt. ‘It’s true that I didn’t fancy meeting the press that day,’ he says.

‘But there was talk of an asteroid hitting New York. As it turned out, it disintegrated before it was due to reach Earth.’ Well, of course.

Whatever the sincerity of his wacko ideas, at least Bellamy is not alone with them. The dafter those ideas get, the happier the other members of Muse – drummer Dom Howard, 29, and bassist Chris Wolstenholme, 28 – seem to be in backing him up to the hilt.

‘Most of Matt’s theories are totally valid,’ says Howard. ‘If you watch any of the documentaries about 9/11, you’re left in no doubt that those were controlled explosions and that the whole thing was meticulously planned by the American Government.

The same goes for the alien/monkey idea. You only have to look at those ancient cave paintings that show Neanderthal men in space helmets flying off in capsules.’

The wildly unconventional bent of Muse’s world view should come as little surprise to those familiar with the band’s music, which takes the listener on a heady trip through apocalyptic dread, eco-horror and barmy conspiratorial delusion.

Quite unlike anything else in the rock canon, perhaps the strangest and most surprising thing about their music is just how monumentally successful it has become.

The band seem more amazed than anyone that their portentous space rock has established them as award-winning, stadium-filling multimillion-sellers.

‘We have to remind ourselves how far we’ve come,’ says Howard. ‘It hits home when we do something like the Brits – the kind of show we’d watch with our folks when we were growing up – and realise that it’s actually happening to us.’

The three have been firm friends since their early teens. Growing up in Teignmouth, Devon, they quickly learned to accept their appointed roles of very peculiar outsiders. ‘We looked different and had different interests to everyone else,’ Howard says.

‘So we got used to being beaten up. We’ve never lost that sense of being outside the norm. If anything, despite our success, we feel as much outsiders now as we ever did.’

From the off, Bellamy was the band’s driving force. The son of George Bellamy, who played guitar on The Tornados’ 1962 international No 1 hit, Telstar, he was steeped in music from an early age.

His fascination with other-worldly matters was encouraged by his mother, a ‘talented medium’, whose idea of a relaxing night at home would involve the entire family gathered around her ouija board.

Together with Howard and Wolstenholme, Bellamy experimented with various dubiously named bands before Muse took strange form. The world, however, was not quick to sit up and take notice.

Meanwhile, Bellamy’s life began to drift dangerously off course. At 18, he found himself working as a decorator and sharing a flat above a sex shop in Exeter.

Drug-taking went hand in hand with small-time criminal activity and he became an accomplice to stealing cars and selling them. ‘Basically,’ he says, ‘I fell in with the wrong crowd. If it hadn’t been for the band, maybe I’d have carried on down that road.’

Given the epically spaced-out nature of their music, it’s generally assumed that Muse are no strangers to illegal substances.

‘We had our fair share of all that in the early days,’ admits Howard. ‘We went through a phase of throwing parties where we’d all wear bizarre masks and completely lose our inhibitions.

‘There was a time when I would use magic mushrooms and found they expanded my horizons in terms of how I thought about life. I think it’s important to be open to new experiences.

‘I can’t understand all the fuss about David Cameron smoking a bit of dope in his younger days. In fact, if he came out and said he’d done a load of magic mushrooms in his youth, I’d probably vote for him.’

Looking back on their career, the band admit it was a relief that they didn’t achieve overnight success.

Their breakthrough came in 1998 when they were signed by Madonna’s Maverick label. Even though the first two albums (1999’s Showbiz and 2001’s Origin Of Symmetry) sold a respectable 1.5 million, they were widely dismissed as Radiohead-lite and never looked likely to cross over to the mainstream.

Then, first with 2003’s Absolution and then with last year’s Black Holes And Revelations, they upped their musical ambitions to histrionic new heights and found no shortage of willing takers. ‘We’d always been dismissed for sounding ludicrous and pretentious,’ says Wolstenholme. ‘So we decided to embrace those elements. Suddenly, we had no fear of sounding over the top.’

Not that Muse’s dizzying rise to the top has been without its dark moments. One such occasion was at Glastonbury in 2004.

Within minutes of stepping off stage after their triumphant headlining performance, they learned Howard’s father had collapsed and died of a heart attack on the festival site.

‘If anything, that experience brought us closer together,’ says Howard. ‘It convinced us we were capable of going much further.’ With the runaway success of Black Holes And Revelations, the band suddenly found themselves both rich and famous.

With Howard settled in north London and Wolstenholme remaining in Devon with his wife and three young children, Bellamy opted for the shores of Lake Como in northern Italy, where neighbours include George Clooney.

On stage, Bellamy performs with an energetic flamboyance reminiscent of Freddie Mercury or Mick Jagger in their pomp.

Off-duty, he claims to have scant interest in the usual rock ’n’ roll trappings. ‘I used to be a gadget nut, but I felt they were taking over my life, so I got rid of them all,’ he says.

‘I seem to have less and less interest in acquiring things. That said, I’m seriously interested in getting my own helicopter. I’ve had the flying lessons. All I need now is a garden big enough to park one in.’

The size of his garden ought to be the least of his concerns for the foreseeable future. All indications are that Muse will go from big to uncontrollably massive this year.

‘One idea we had was to fly into the gig on jetpacks, but the council seems to have a problem with that,’ says Bellamy.

‘And they are drawing the line at the idea of beaming the show on to a blimp so the whole of London can see it. Whatever we end up doing, it’s sure to be spectacularly big, preposterously insane. Just how we like it.’

Muse’s single ‘Invincible’ is out on April 9. Muse play Wembley on June 16 and 17

Go back to Daily Mail