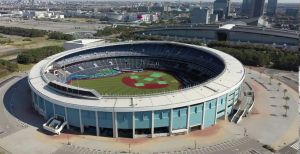 The ZOZO Marine Stadium (ZOZOマリンスタジアム; Zozo Marin Sutajiamu - Also reffered to by it's second non-sponsorship name, Chiba Marine Stadium) is a baseball stadium in Chiba City, near Tokyo in Japan. Opened in 1990, the stadium holds 30,000 people. The stadium is located across the street to the Makuhari Messe convention centre.

The ZOZO Marine Stadium is home to the Chiba Lotte Marines baseball club from the Pacific League, and is also used by the Rugby union. Musical artists who have performed at the stadium include Lady Gaga and Madonna. The stadium (and the Makhuari Messe) is also used by Summer Sonic Festival as the main venue for the Tokyo edition of the festival. As such, it has seen performances from artists such as The 1975, Radiohead, Marilyn Manson, The Verve, BTS, Chance The Rapper, Linkin Park, Blink 182 and more.