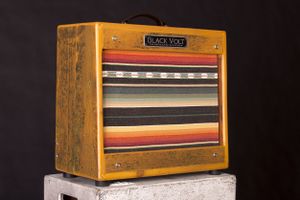 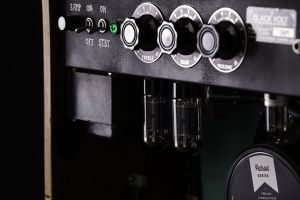 Back of the amp with controls

One of the amplifiers Black Volt Amplifications make is called a Crazy Horse, which is, in design, shape and size, very similar to the Fender Tweed Deluxe. Bush's guitarist Chris Traynor described it as "It's as if a prototype Fender or Magnatone fell off the truck in the early sixties and never made it to the factory to be mass produced."

The amp's sound is a mixture of a Fender Tweed Deluxe, a 4x10 Fender Bassman and a 40-watt Marshall combo, providing clean tones of the Fenders with the agression of the Marshall. Throwing a booster or a drive pedal, says Loria, can also make it sound like a Plexi.

One of the Crazy Horses is also owned by Rich Costey and Bellamy used it on the song Break It to Me, blended with a clean Vox sound.[1]

Go back to amplifiers