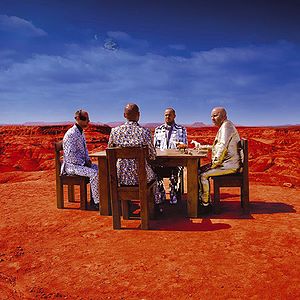 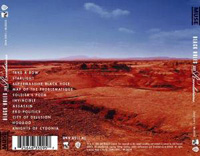 The album is dedicated to the memory of Helen Kirk.[1]

The AU release includes a copy prevention rootkit (virus). To ensure your computer does not get infected, disable autorun before inserting the CD into your computer. This only affects Windows systems.

The album is less classically orientated than Origin of Symmetry and Absolution, while introducing new influences including techno, jazz, soul and R&B. The album is made up of a mix of these genres. Nevertheless, Bellamy described the album as "very classical"[7]

Bellamy approched Costey in regards to producing their next album during the Absolution tour. Costey followed this up by contacted Bellamy a few months prior to starting the album.[8] The playing of Black Holes and Revelations tracks and its b-sides live in effect started in 2003 with "Take a Bow" being played as a piano interlude after "Citizen Erased". Playing of the tracks proper started mid-2004 with "Glorious". "Crying Shame" made its debut in 19 December 2004, while "Assassin" and "Exo-Politics" in their early forms made their debut during the 2005 MTV Campus Invasion Tour (8 April 2005).[8]

The album was written partly before the Absolution Tour, partly during said tour and finished during their time at Miraval Studio, Avatar and Electric Lady studios.[5] As with Absolution, the time frame was not as large a concern as on the former two albums, hence Muse took their time over recording the album. The freedom also extended into the style of the music they wrote, delving into areas that Muse considered might be risky for other bands.[9] While previously Muse had written songs with their ability to play them live in mind, the band did not concern themselves with this ability whilst recording Black Holes and Revelations.[9]

During the band's time at Miraval, the album was hindered by the band's fear of bats and ghosts, as well as the owner who purportedly didn't want Muse there.[5] Only two songs were recorded during Muse's time at Miraval, namely "Take a Bow" and "Invincible", although 18-20 songs had been written.[10] Matthew Bellamy claimed that had the entire recording process been carried out at Miraval, it would have turned out akin to Pink Floyd's Dark Side of the Moon.[5] He described some of the material that they put aside from their time at Miraval as "a little too progressive and symphonic" for the type of album they wanted Black Holes and Revelations to be,[11] and "waffling on the piano, a lot of orchestration".[11] The band had become frustrated during their time at Miraval at the "lack of rock" in their music.[11]

In the Autumn 2005, Muse moved to New York, recording at Avatar and Electric Lady Studios. As well as recording in New York, Muse partook in the lifestyle of the city, which Dominic Howard claims influenced the style and direction of the album, particularly "Supermassive Black Hole".[12] The album's recording finished at Christmas 2005, after which the band moved to London and finished mixing at Sanctuary Townhouse Studios.[5] Whilst recording the band worked on one song at a time, keeping those they liked and scrapping those they disliked.[13] New instrumentation not used on previous recordings include a buchla synthesiser and a trumpet.

The track list of Black Holes and Revelations was finalised by April 2006,[14] and the final track titles were decided by May.[15]

Whilst writing and recording the album, Muse listened to music in the style of Joe Meek, Kill Bill and Nancy Sinatra. Bellamy had been living in North Italy for a while and had discovered some old Italian traditional folk songs. They had also been inspired by Belgian bands such as Millionaire and Evil Superstars. Bellamy also listened to the style of his father's band, The Tornadoes.[16] Chris commented that the band listened to Islamic radio stations whilst writing the album and the progressive elements of that music influenced songs such as "Assassin".[17]

The general theme of the album centres on dystopian-orientated/kleptocratic politics, along with accompanying war. As well as in the music, this can be seen in the album art and booklet.

The album art, created by Storm Thorgerson,[5] features the four Horsemen of the Apocalypse from the Book of Revelation.[5] Their four horses of different colours, are on the table. The rider of the white horse represents the Anti-Christ, the red one war, the black famine and the pale one represents death and decay. The horses are small to signify the ills of the riders had outgrown those of their horses.[18]

The images inside the album booklet include the HAARP installation, M87, papers from Project MKULTRA, and a blue contrail, in reference to the Aurora aircraft.

HAARP is a scientific research project, the goal of which is to study ionosphere. Muse later entitled the live album H.A.A.R.P. after the project. M87 is an elliptical galaxy in Virgo that emits a jet of matter, probably from a supermassive black hole within it, while the blue contrail is a reference to the Aurora aircraft, which some believe is a top-secret hypersonic aircraft that leaves a blue contrail behind it.

Q Magazine offered the table and chairs featured on the front cover as a prize in a competition, in September 2007.[19]

To promote the album in the UK, a set of MP3 player headphones loaded with the album was distributed for press use, including a short biography and track list. No promotional CD was produced for use in the UK. The US promo CD-R and the KROQ Weenie Roast CD-R are watermarked and encrypted so that they cannot be played on a computer. Each was printed with name of the intended recipient on the disc. In Germany a CD-R promo featuring an interview with the band was circulated to promote the album.

Black Holes and Revelations was re-released early in 2007 as a Tour Edition with a bonus DVD. A few online stores and listings on eBay have claimed that there exists a different Japanese CD/DVD set with additional DVD features including 'Live performances from Summer Sonic 2006 and Reading/Leeds Festival 2006, and Behind-the-scenes studio footage'. However, this is not the case, the DVD itself is identical to the original, which includes the videos and live performances of the first 3 singles from the album. The release of the album was completed when made available in Ukraine, in August 2007.[2] A version of the album featuring the "Grand Omega Bosses" version of "Assassin" was made available on 7digital.com from during 2007, but this was later amended to the album version of "Assassin" at a later date.

The vinyl edition became available on Amazon UK during early March, 2007,[22] but all orders where subsequently cancelled and the item remained seemingly unreleased. The double LP never materialised, making Black Holes and Revelations the first Muse studio album to have no vinyl edition. Similarly, the album was the first to have no French singles box-set released.