MuseWiki, wiki for the band Muse
Revision as of 12:21, 21 May 2020 by KeTeVemCovers (talk | contribs) (Created page with "thumb|right|Brann Stadion '''Brann Stadion''' is a football stadium, located in Bergen, Norway. The stadium has been opened in 1919 and is named aft...")
(diff) ← Older revision | Latest revision (diff) | Newer revision → (diff)
Jump to navigation Jump to search 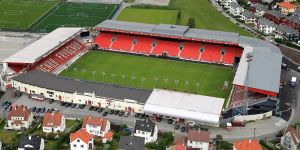 Brann Stadion is a football stadium, located in Bergen, Norway. The stadium has been opened in 1919 and is named after SK Brann, the football club, which has called the stadium it's home ever since it's opening after Christen K. Gran, member of the sports comitee and one of the co-founders of Brann, got the idea of building a new home stadium. The first stadium got running tracks on all sides of the pitch and the club house was located at the halfway line on the south side. In 1930s, the club house was relocated as the main stand was built and expanded over the years. Because of this, the stand has a disjointed look. The stadium got it's first expansion in 1999 with the construction of the Frydenbø stand. The second expansions were unveiled in 2006 and 2007 with BOB and SPV stands, and the latest expansion, still under construction, beginning in 2019, with the so-called Fjordkraft Stand. The stadium's current capacity sits at 17,686.

The stadium hosted several SK Brann matches aswell as international matches. It hosted three Norwegian Cup finals in 1922, 1930 and 1947. In 1920, it hosted the national athletics championships. Artists who have performed at the stadium, apart from Muse, are A-Ha, Bryan Adams and Kurt Nilsen.