Muse produced a powerful, pulsating set for their first headline performance at Reading on Saturday night, setting the sky alight as they did so. 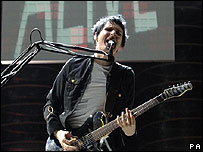 From the off, they grabbed the attention of the tens of thousands of festival-goers in front of the main stage with their sound and light show.

At moments sounding like classic Queen, at others like Pink Floyd, they also mixed in classical music among their rock and synthesisers.

With "Terror Storm" written on his T-shirt, singer Matthew Bellamy took to a white piano at one point. Afterwards he said they were getting a vibe from the crowd, and in the words of their own song they really seemed invincible.

Muse were preceded by the Arctic Monkeys. It was amazing how Alex Turner's almost incomprehensible mumbling as he announced songs was transformed into that clearly distinctive Sheffield charm when he sang them.

The English Eminem, Mike Skinner has certainly matured since first bringing his band The Streets to the main stage of one of the country's most established festivals in 2002.

Then he sprayed cans of beer around, but now he's also learnt how to work the crowd.

"Hello Glastonbury," he joked as he came out, and it wasn't long before he had the public swinging their shirts above their heads.

They may be enjoying success, but someone who can sing When You Wasn't Famous certainly hasn't lost touch with reality.

Just as Muse brought something old and something new, this year's Reading had other touches of nostalgia.

Reminiscent of The Pogues at their best, Flogging Molly gave the crows two opportunities to jig along to their Irish American tunes - once on the main stage, and later on the Lock Up stage.

Mike Skinner made a triumphant return to the festival

If you closed your eyes during Wolfmother you could have imagined yourself at an early '70s Led Zeppelin concert. And when you opened them and saw singer Andrew Stockdale's Afro and moustache, you could have really believed you had gone back three decades.

Feeder, Dirty Pretty Things, The Cribs and The Futureheads also graced the main stage. But one of the joys of Reading is being able to wander off to the smaller stages.

Those great survivors and John Peel favourites The Fall attracted a mixture of veteran fans and the curious to the Radio One/NME stage.

Singer Mark E Smith's face is now as crumpled as his distinctive black leather jacket, but they were an example to many younger groups.

Their hypnotic, repetitive rhythms had one way-out fan dancing wonderfully outside the tent as if she was watching a band from San Francisco in the '60s, not Manchester's '70s punk scene.

And next door on the Lock Up stage Alexisonfire lived up to their name with a thrashing performance.

Reading takes place at a time of year when the weather can't make its mind up whether it's still summer or already autumn.

Moments of hot sun are followed by downpours, making it impossible to know what to wear - explaining some of the outfits on show.

Flag waving is de rigueur at festivals these days - there was even one from Colombia at Reading - which may also explain the presence of the group Antiflag.

But all the flag waving in the world couldn't have spoiled the day.