Alternative Press 2006-08 – The lighter side of Black holes 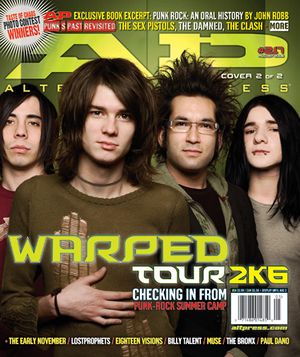 INDEX: 176 MUSE
Muse's fans swear the trio's music holds the key to the mysteries of the world. But would you prefer to read The Da Vinci Code, or ride a bike?

The end of the world may be near, but epic rockers Muse have discovered it's got a good beat- and you can dance to it, too

The lighter side of Black Holes

AS THEIR VAN HURTLES THROUGH THE MEAN STREETS OF NEW YORK, the members of Muse huddle in the back, eyes glued to the flickering screen of a Powerbook. Courtesy of a hijacked wireless connection, the three Englishmen are viewing a website that clearly spells out the rapidly approaching End Of The World As We Know It. Matt Bellamy, the group's lead singer, guitarist and chief Investigator of the covered-up and the unexplained, suddenly voices the thought on everyone's mind: "How come no one else is talking about this?"

If you're one of those fans who rather enjoys the idea of Muse as Radiohead's over-excitable, conspiracy-theory-loving kid brothers, you'll want to stop reading after the next period. The scenario described above is 100-percent true, but, like any good government whitewash, it's also missing a few essential details. For one thing, it's a gorgeous spring afternoon in Manhattan, the kind of perfect day that could make you discount the end of the world even if you had rock-solid proof it'd be arriving in an hour. For another, Muse - Bellamy, bassist Chris Wolstenholme and drummer Dominic Howard - despite having jetted into the Big Apple late the previous night, are definitely feeling the good mood, amusing themselves at a site they've discovered called savelivesinmay.com, which forecasts a massive tsunami in the Atlantic Ocean at the end of May.

By now, you'll probably have realized that dire prediction failed to materialize. But it gives Bellamy - who's been on record as endorsing such ideas as alien DNA in humans, as well as mind control via cell phone - a chance to deflate about his image as the conspiracist du jour. As discussion in the van turns to how the predicted tsunami might wipe out the American press junket for Muse's fourth album, Black Holes And Revelations deadpans, "I guess we'll just have to do phoners."

The new album has already revealed a lighter side to Muse's massive, prog-inspired sound - which is not a development welcomed wholeheartedly by the group's fanbase. When the first single, the funky and danceable "Supermassive Black Hole," appeared this spring, some una-Muse-d followers of the group took to the message boards to denounce it as a fake. "That was quite funny," admits a grinning Bellamy, jauntily dressed in a plaid suit and scarf. "I didn't know people would be that surprised. But I think it's quite nice to challenge people's conception of what the band is."

The softspoken Howard puts it more directly: "That's all positive in my eyes. It feels like we've always had very extreme reactions to our work. You either love it or hate it, but at least it's inspiring something."

This attitude goes a long way toward why repeated, and sometimes derisive, comparisons to Radiohead and Queen (thanks in part to Bellamy's fearsome falsetto) have only strengthened Muse's resolve. not every little-known British act would have told Madonna's label to get stuffed; Muse not only did it in 2001, when Maverick tried to get the band to tone down Bellamy's vocals, they also got the last laugh, finally releasing the disputed album, Origin Of Symmetry, in America last year on Maverick's parent, Warner Bros.

"We kind of tried it [Maverick's] way for five minutes, and it didn't work," recalls Wolstenholme. "That's when we realized we had no choice but to be ourselves."

THE GREAT DETECTIVE SHERLOCK HOLMES ONCE SURPRISED his faithful sidekick Watson by stating that he much preferred the foggy, crowded streets of London to the surrounding countryside, which he found far more sinister. When Muse decamped to France with producer Rich Costey to try recording Black Holes, they had much the same experience. The problem wasn't Costey, who worked with Muse on their last album, 2003's Absolution. If anything, his stock had gone up, thanks to his work with Franz Ferdinand, and the fact that he's an excellent musician, as well as a producer. But being secluded in rural France made Muse's musings turn dark.

"We just felt this weird sort of confinement," explains Howard. "We didn't feel like we could be that paranoid in a city like New York. Just look out there," he says, gazing out the window of the band's Lower East Side hotel. "It's such a fucking cool place. You can just feel the energy of millions of people."

Bellamy, in particular, soaked it up. The nights of club-hopping with a female DJ friend may not have turned him into a turntable whiz ("I can't do it to save my life," he admits, laughing), but they made him more receptive to the simple pleasures of "a good beat and a good vibe," both also found in the very U2-style "Starlight". "There's two different places the songwriting comes from on this album, he says. "There's songs like 'Starlight', that are quite honest and reasoned about my life. Those are the revelations. And there's other songs that connect to something deeper and more unknown, that I don't even know where it comes from. That's the black-hole part of it."

In that category, Bellamy puts the tracks inspired by his readings of authors like Jim Marrs, who try to expose a shadowy hand guiding world events. It's been a favorite topic for Bellamy in the past, and songs like the anthemic "Take A Bow" return to the theme of "a person at the bottom of pyramid of influence and power, who's kind of waking up to the fact that the forces above them are manipulating them."

"The problem is," he continues, "if you take those conclusions to the extreme, you end up getting diagnosed as schizophrenic and put into a building with a lot of other people like that. So you have to be careful." He starts to chuckle. "I'm not all the way there yet, obviously."

WATCHING BELLAMY, WOLSTENHOLME AND HOWARD CLOSE RANKS later, during some downtime at a photo session in Brooklyn, is a reminder of the bonds developed over the band's dozen-year history. As the lead singer, songwriter and instrumentalist, Bellamy naturally commands most of the attention, something his colorful quotes and rock lineage (he's the son of guitarist George Bellamy, a member of the 60's instrumental act The Tornados) reinforce. But Muse began as three 15-year-old mates from the sticks of Devon, England (Teignmouth, to be exact), playing music to escape small-town boredom - and those ties still bind.

"We've all learned music together," offers Wolstenholme. "I learned to play bass with Dom's drums. If I picked up a bass and tried to play with some other drummer, it'd be crap. It really would," he insists.

Or maybe not. Some guy named Sir Paul McCartney, who reportedly learned a thing or three about playing bass in some band called The Beatles, gave Wolstenholme's playing two thumbs up after watching him at the Glastonbury Festival in 2004. The mention of that praise makes Wolstenholme, the quintessential bassist - tall, solid and modest - visibly blush.

But the tragic aftermath of Glastonbury 2004 provided a cross roads for Muse. Directly after playing the show of their lives, the band came offstage to learn that Howard's father had died of a heart attack. The trio took time off, and there was speculation a split might follow. However, "quitting was never something I ever considered," Howard now says. "What I did learn is that you need positive things in your life." The strength of his partnership with Bellamy and Wolstenholme, he concluded, was one of those things. "I could never lose that. Never. Muse is the one thing that could help me get over losing someone like my dad."

What some inquiring minds would like to know, however, is whether Bellamy's theorizing about secret governments and alien visitors represents his bandmates' views as well. Both say that it does. "I think that stuff is something that intrigues everyone," says Wolstenholme. "Feeling like you're not being told the truth by the government - I don't think that makes us any different than anyone else."

Yet whether dancing the night away in New York, spending time at the home of his Italian girlfriend or enjoying the creative accomplishment embodied in Black Holes, Bellamy admits he's more inclined to look on the bright side these days. Even the new songs that rage against the machine - like the storming epic "Knights Of Cydonia"- find their protagonists kicking back against the pricks. "It's this spirit of fighting against the manipulation of our brains," says Bellamy, "which I think is positive."

But if anyone is hoping the new Muse album contains the encrypted secrets of the NEw World Order, well, Bellamy can only shrug and smile.

"I'm afraid," he says, "we've been over-shadowed by The Da Vinci Code."

A BICYCLE BUILT FOR MUSE

IT ALL STARTED with a simple desire to get some exercise on tour and a hastily scribbled note on a set list. But thanks to Muse fans, the two seemingly unrelated events turned into a massive treasure hunt that reinforced the idea of the group as keepers of some higher, hidden truth. Not a bad return on an innocent trip to the bike shop.

When the band toured America last year, frontman Matt Bellamy recalls, "We attempted to get fit, so we bought these bicycles. And then we realized we couldn't take them back to England with us, so we'd either have to toss them in the bin or do something else with them." The answer presented itself by accident. Hardcore Muse-ologists who'd been lifting onstage set lists came upon what appeared to be some sort of code that begged to be cracked. In fact, says Bellamy, it was a direction "telling the keyboard tech which piano setting the keyboard needed to be on for the next song."

But when Muse discovered that listeners were "reading some sort of deep meaning into it," they were amused enough to start dropping real clues to real prizes - namely, their bikes, locked up at various locations and discovered by a small group of dedicated obsessives who solved the anagrams.

Bassist Chris Wolstenholme applauds their resolve, but says not to expect "any hidden messages" on the band's new album. "I don't think," he confesses, "that anyone's going to find a bike hidden in a ditch this time."

Go back to Alternative Press