While most people have probably yet to make their summer vacation plans for 2007, English rockers Muse have known for some time what they'll be doing. It's the same thing they've been doing -- touring. 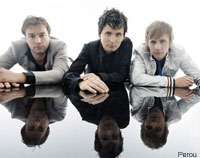 Bassist Chris Wolstenholme tells AOL Music that after the trio head Down Under for the Big Day Out festival, they'll likely be back in America around March. "I think we'll be touring up until the end of next summer," he says.

Having had their itinerary mapped out so far in advance, Wolstenholme jokes, "We were actually trying to work out if someone should try and set a record in the Guinness Book of World Records for the longest planned schedule ever."

If the planned routing holds true, Muse will have been touring 'Black Holes and Revelations' for well over a year by the time the trek wraps up. Still, Wolstenholme says the playing never gets old. "The great thing about playing live is it's different every night. The people are different, the songs change, the room that you're in is different," he says. "Even if you play the same set every night, it never feels repetitive."

Go back to AOL Music