Xfm article based on a Xfm interview with Christopher Wolstenholme, on the 12th April, prior to Muse's gig inside Royal Albert Hall

Exclusive: Muse To Self Produce Next Album 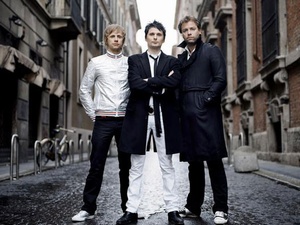 As the hallowed environs of the Royal Albert Hall trembled in anticipation for Muse's sci-fi neo-prog, bassist Chris Wolstenholme spoke exclusively to Xfm about their plans for next album and who's turning them on musically.

The good news for Muse fans is that the Devon behemoth is already planning for the next album, with the band considering taking hold of the production reigns themselves.

Wolstenholme explained: "'Supermassive Blackhole' [sic] was full on electronic, it was such a departure for us but it really worked. It was the first time we got really involved with the gear side of things ourselves.

"Before that we had to tell a producer "we want some kind of synth thing" but I think we're going to try and start [producing the next album] ourselves. It opens up a whole more experimental stuff that we can now do. But if it all goes tits up then we'll get someone else in!"

Though remaining coy as to what fans should expect from Muse at their double-headlining slot at this year's V Festival, the bassist said: "That's the one big show that we're doing this year so I'm sure that it'll be pretty spectacular but I'm not sure what as it's quite a way off."

Wolstenholme also revealed Muse's fondness for a certain up'n'coming Scottish band: "Glasvegas; we're all sort of generally into them...we've heard a few tracks and we think they're going to be pretty huge."

Muse headline the sold out V Festival on August 16 and 17 in Hylands Park, Chelmsford and Weston Park in Staffordshire.

Tickets to V Festival are available now from the Xfm Xchange on 0871 222 1049 or from the Xfm Online Ticket Shop.

Go back to Xfm