Following Matthew Bellamy's Twitter posts[1][2] from Saturday 4th July 2009, the Ununited States of Eurasia microsite was launched alongside the new Official Muse website on Monday 13th July 2009, after the completion of a countdown on a holding page that replaced the older Muse website on previous Friday. This hunt is to unlock access to song "United States of Eurasia".

Due to the inclusion of the leaked first letter from Aunt Dora from PHASE TWO in this article, this MuseWiki article in this state was used for the completion of PHASE TWO.

On the day it was revealed, the following text was displayed on the page, on which fans could register as "agents".

After registration the following text was displayed.

In an official email the purpose of the microsite was revealed:

"Not only are we launching a new website today, but we're also taking registrations over at http://ununitedeurasia.muse.mu for :something pretty special that will be starting in the next couple of days. Those of you who have been keeping up with Matt's :comments on Twitter will have an idea of what this is all about, but let's just say... if you want to be the first to hear a new :song from The Resistance, then get yourself registered today. It's going to need a whole lot of fans all around the world to make :it work so tell your friends and stay tuned!"

On Tuesday 14th July 2009 Phase 1 began. The map of Eurasia was updated and text on the front page of site was change to:

STATION FUSE became active and the following text was displayed on the site.

The audio file on the site was a female voice over some distorted audio, that read out the following message: <flashmp3>http://www.musewiki.org/images/StationFuse.mp3%7Crightbg=0x83F52C%7Cleftbg=0x83F52C%7Cbg=0x000</flashmp3>

Which can be read as the following:

From this it seemed that once there a fan would meet there and give the phrase "BILDERBERG GROUP" to someone known as "DESIGNATED AGENT 978-0465027262" and receive a USB flash drive. 978-0465027262 is the ISBN for the book "The Grand Chessboard" by Zbigniew Brzeziński, from which the song "United States of Eurasia" draws its inspiration. They had to take a photo and/or video there and upload it to the depositories. The flash drive presumably contains the "USB ARMING KEYCODE" to be entered into the text box on the FUSE STATION site. This will upgrade the status of PHASE ONE to AMBER. 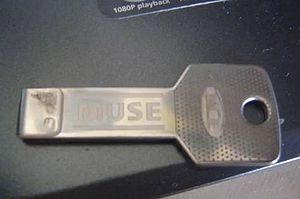 From this it seems that the "AGENT" involved in the completion of PHASE ONE, will receive two Muse tickets to a performance of their choice, plus get a chance to meet the band themselves, as well as being responsible for the successful entering of the code. Muselive.com member willytarno, amongst over thirty others,[3] attempted to retrieve the USB drive whilst updating on twitter. He succeeded in obtaining it.[4]

The USB drive contained a PDF file containing the code, which was entered and PHASE ONE became primed.

On the morning of the 15th July 2009, the Ununited States of Eurasia microsite homepage was updated to display the current number of active HUMINT RESOURCES and an RSS feed of current updates. The STATION FUSE page was updated to show a Google Map of Paris.

Following the priming of PHASE ONE, the STATION FUSE page was changed to read:

Upon correct entry of a code the page then read:

The 50 seemingly random phrases were anagrams of different locations. The correct anagrams and their solvers were finally announced as follow:

The MUSIC page then became active with the following text:

On the MUSIC page, before PHASE 2 progressed to amber, clip 1/6 of "United States of Eurasia" could be heard. <flashmp3>http://www.musewiki.org/images/UnUSE_USE_clip_one.mp3%7Crightbg=0x83F52C%7Cleftbg=0x83F52C%7Cbg=0x000</flashmp3>
This concludes PHASE ONE.

The audio on the page read out the following message: <flashmp3>http://www.musewiki.org/images/StationCharlie.mp3%7Crightbg=0x83F52C%7Cleftbg=0x83F52C%7Cbg=0x000</flashmp3>

At one point STATION CHARLIE was temporarily updated to instead read:

This new page featuring a letter from "Aunt Dora" was then returned to its original state featuring the audio message. It is unknown why this page was only briefly displayed and retracted, but it can be assumed to be a mistake as the initial page with an audio message was put into use.

German fans Anne Kieshauer and Tom Zylberszteinattempted to retrieve the USB key in Berlin, but were not successful, as the "two guys" that obtained it were bigger and closer to the agent at the time of his first appearance.[5][6]

The two guys, Burn and Albi, uploaded their pictures onto the Flickr and Youtube accounts, but had intitial trouble over entering the activation code, much like willytarno had in Paris. However, after several tries, with no success, a user called projecteurasia contacted them and revealed that the page had problems after the Aunt Dora letter accidentally got displayed and requested the activation code from Burn to get the page to work again. Burn was skeptical over whether or not projecteurasia was a real website technician and so projecteurasia put the phrase 'Burn and Albi going to meet muse!' in the source code for the Station October phase.

The code was then entered succesfully and STATION CHARLIE went amber and was updated with the following text.

The word "SECURELY" in the phrase "PREVIOUS DOCUMENTS ARE LEAKED AND HELD SECURELY" linked directly to this article, referencing the original letter from Aunt Dora that had been leaked, indicating it too was to be used in the PROJECT EURASIA treasure hunt.

The original letter references the Threepenny Opera by Bertolt Brecht and Kurt Weill. The ENTITY was correctly identified as "The Silverlake: a Winter's Fairy Tale" within minutes and STATION CHARLIE went green.

With a few hours the audio file on the MUSIC page was updated with the second part of "United States of Eurasia". <flashmp3>http://www.musewiki.org/images/UnUSE_USE_clip_two.mp3%7Crightbg=0x83F52C%7Cleftbg=0x83F52C%7Cbg=0x000</flashmp3>

On the morning of 16th July 2009 both Phases 3 and 4 were locked. The Moscow station was revelated to be STATION OCTOBER and its page as read the following.

At 22:24 BST on the night before STATION OCTOBER became active a message on musewire suggested the connection between Berlin and Moscow is "Lotte's Deadly Shoes",[1]. This was a reference to Lotte Lenya who was the widow of Kurt Weill, and was the star of a revival of the Threepenny Opera that was referenced in Aunt Dora's letter. Lotte Lenya also played Rosa Kleb, in the James Bond film From Russia With Love, who had poison knife blades in the tips of her shoes.

Fans Анна Муратова and Мария Федорцова attended but neither were successful. The code was nevertheless entered and STATION OCTOBER went amber, with the following text appearing.

The correctly entered listed as the 99 were found, resulting in the complete list when PHASE THREE nwas activated.

After this STATION OCTOBER became active and the next section of "United States of Eurasia" was uploaded.

On the morning of 16th July 2009 both Phases 3 and 4 were locked. The Dubai station was revealed to be STATION UMAYYAD and read as following.

The key was found and SATION UMAYYAD was primed.

The correct entres were as following:

Hours later that evening, the fourth part of "United States of Eurasia" was uploaded, and some lyrics from the section uploaded were posted on musewire.

The correctly identified ENTITIES were then displayed in the STATION HISTORY as follows.

This stage, 6/6 united the States of Eurasia on the site, all areas were Green.

Following this, the final shard was uploaded and an unexpected STATION//COLOSSUS was locked.

A finale stage was locked in the form of STATION//COLOSSUS, taking place in New York City. This station different from previous stations as there was an option to not activate if a deadline was breached, resulting in the molibisation of "THE RESISTANCE".

Upon entering the correct key code the 'United States of Eurasia' would be recognized and an MP3 of the song would be available to download, or alternatively failure to activate the area would cause the Resistance to 'mobilize' and Project Eurasia would enter "LOCKDOWN CRISIS LIMITATION MODE".

The key code was a single word to be determined from three musewire updates that read as the following:

At 01:02 BST Matt posted an update to Musewire hinting that "Collateral Damage" would also be obtained from activating the station.[10]

In the morning further uodates were posted elaborating on the earlier clues.

After PHASE THREE and PHASE FOUR had been locked a news message was posted that said the following.

In response to the removal of the trends by Twitter the following news update was posted on the Ununinted States of Eurasia site.

Go back to Links