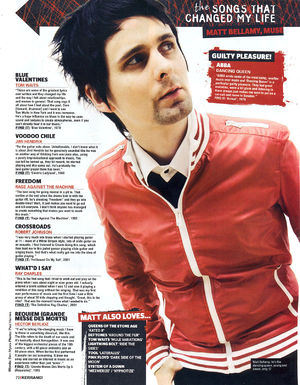 The songs that changed my life

Blue Valentines
Tom Waits
These are some of the greatest lyrics ever written and they changed my life and the way I felt about relationships, and women in general. That song says it all about how I feel about the past. Dom and I went to see Tom Waits in New York and it was immense. He's a huge influence on Muse in a way that he uses sounds and textures to create atmospheres, even if you can't directly hear it in our music.
Find it: "Blue Valentine" 1978

Voodoo Child
Jimi Hendrix
For the guitar solo alone. Unbelieveable. I don't know what it is about Jimi Hendrix but he genuinely sounded like he was on another way of thinking from everyone else, using a purely improvisational approach to music. You can tell he turned up, they hit record, he started playing and this came out. He's probably the best guitar player there has ever been.
Find it: "Electric Ladyland" 1968

Freedom
Rage Against the Machine
The best song for going mental in a pit to. That section at the end when the drums kick in with the guitar riff, he's shouting "freedom!" and they go into double time? Well, it just makes you want to go out and kill everyone. I dont think anyone has managed to create something that makes you want to mosh this much.
Find it: "Rage Against The Machine" 1992

Crossroads
Robert Johnson
I was very much into blues when I started playing guitar at 11 - more of a White Stripes style, lots of slide guitar on an acoustic. I first listened to Cream doing this song, which then led me to this jaded geezer playing slide guitar and singing blues. And thats what really got me into the idea of guitar playing.
Find it: "Hellhound On My Tail" 2001

What'd I Say
Ray Charles
This is the first song that I tried to work out and play on the piano when I was about eight or nine years old. I actually entered a talent competition when i was 12 and won it playing a rendition of this song without the singing. That was my first ever performance of music and the first time I saw a little group of about 30 kids clapping and I thought 'Great, this is the vibe'. And thats the moment I knew what I wanted to do.
Find it: "The Definitive Ray Charles" 2001

Requiem (Grande Messe Des Morts)
Hector Berlioz
If we're talking about life-changing music I have to throw in something classical, like this. The title refers to the death of our souls and its basically about Armageddon. It was one of the the biggest orchestral pieces of the 19th Century, with a 60-piece orchestra and and 80-piece choir. When Berlioz first performed it, people ran out screaming. It blew me away and started an interest in music as an experience rather than just 'tunes'.
Find it: "Grande Messe Des Morts Op 5 (Requiems)" 1995

Dancing Queen
ABBA
ABBA wrote some of the most camp, woofter music ever made and 'Dancing Queen' is a particular guilty pleasure. They had great melodies, were a bit glam and listening to them always just makes me want to put on a cat-suit and move to Sweden.
Find it: "Arrival" 1976

Go back to Kerrang magazine