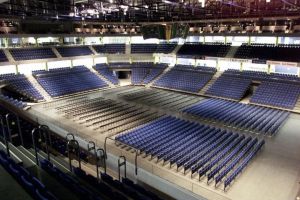 The Saku Suurhall (English: Saku Great Hall) is an indoor multi-purpose arena in Tallin, Estonia. It was opened in November of 2001 and was designed by architects Esa Viitanen of Pro Ark OY and Andres Kariste of North Project AS. It is the largest multi-purpose arena in the country with the capacity of up to 10,500 people. It's named after the Saku Brewery, an Estonian beer brewery and soft drink company.

The arena is, since 2002, a member of the European Arenas Association (EAA). It is owned and operated by OÜ Best Idea and is the home arena to BC Kalev/Cramo, a local Tallin-based basketball team.

Muse only played at the arena once in 2012, in what was their first performance in Estonia.