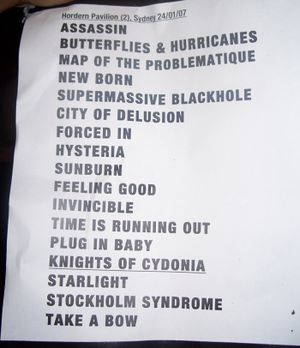 Both "Next song's called Starlight" and "Cheers" were said during the concert.

Towards the end of the gig Bellamy asked who'd be at Big Day Out the next day and responded to peoples screams by saying "you, and you yeah." After Take A Bow he said "Thank you very much, see you tomorrow."