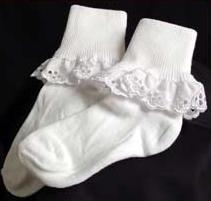 In 2001, in a post on one of the (somewhat numerous) threads on the old muse-official.com messageboards that eventually took a turn for the sexual, Bellamy lived up to his dubious reputation of only responding to sex-related threads and admitted to finding the wearing of just "socks + tshirt, thats it" as the ultimate turn on.[1]

Pertinent lyrics: "Wearing just socks and a phone..." - Map of Your Head

Matt also has said that 'women wearing socks' just turn him on. "I don't know why ... it's weird. Any particular socks? No. Just socks. Perhaps it's a sporty thing. "