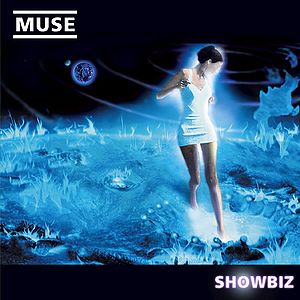 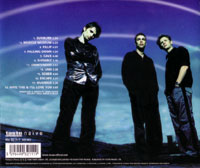 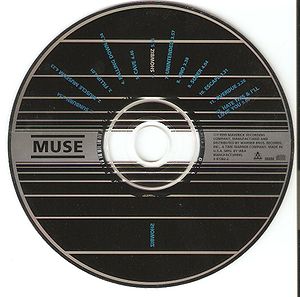 A lot of the songs that appear on Showbiz, were written on Matthew's nan's basement with damp down the walls, egg boxes up them and weird shiny black spiders, which inspired Muse around that time musically.[3]

Showbiz was Muse's debut album, having been recorded between 1998 and 1999. The songs themselves included some of the older songs in Muse's repertoir, dating as far back as 1996. All songs on the album had been witten by 1997. These were among the "fifty or so" that Muse had written before entering the studio.[4] The band picked those which they deemed least progressive to make up Showbiz.

John Leckie, who produced the album, started attending Muse's concerts in the latter half of 1998. Leckie was based at Sawmills recording studio, where owner Dennis Smith had given the band free recording time the previous year, from which the Muse EP resulted. He built up a relationship with the band during this time, coming to say that he'd want to work with the band if ever they could afford him. Leckie had not worked with any bands quite some time prior to doing so with Muse. The recording had finished by the 15th of May 1999.[1] Thirteen songs were recorded for album release, with Spiral Static being the one not to make it on the album. While attempted in sessions, the vocals were too difficult for Matt to get a sound to his liking, so it was abandoned, only to be finished in January of 2000 as a Japanese bonus track.

Other songs such as Pink Ego Box (then known as Instant Messenger) were considered but ultimately left for b-side release as the band didn't think they were good enough for album inclusion. Others, such as Do We Need This and Nature_1 (then known as Natural Disaster), were known to be saved for the second album although neither would make the final cut, with Do We Need This ending up as a Muscle Museum b-side due to Matt's change in opinion of the song.

Matthew described the album as: "It's all about power and hitting people with large walls of sound." and that "Some of the songs on Showbiz have changed shape over the course of the five years we've been playing them," Bellamy suggests. "You could translate songs differently, in a loud and heavy way, or a mellow and quiet way, and still make it sound good. On songs like 'Falling Down' and 'Unintended,' the words came first. But usually the music is first, then the melody. Then it's getting the lyrics to fit around the music."[5]

Chris said about the album that: "It's not all about relationships with people. It's sometimes about growing up with all this technology and everything around us. I think you could learn to do things the wrong way. The problem becomes communicating with people," Wolstenholme explains. "Then again, on the other hand, the Internet and e-mail have made that easier. It's a smaller world. Our songs could seem negative from the outside, but it's uplifting for me. It's about sharing experiences."[5]

The booklet which comes with the album does not have lyrics on it, but instead, a line from each song is cited in bold letters. A limited "Festival Edition" was released in the Benelux region featuring a bonus disc with the same content as the Japanese Random 1-8 EP, although without the three hidden "Sunburn" remixes after "Do We Need This (live)".

The UK and US promo CDs are held between two pieces of perspex, one engraved with the Muse logo, bolted down the middle. The aforementioned CD originally came with a special perspex spanner. Two other promo CDs, one with alternative artwork, another with a gold promo stamp, were made in the US. A variety of promotional CD-Rs were used to promote the album in the UK, US and Japan. The exclusive advanced promo CD was an European promo used for promoting Showbiz, and contains six faded song samples from the album.

The album has gone to sell over 300,000 in the UK making it Platinum, and has sold over 700,000 copies worldwide. Whilst the first release was on the Mushroom and Taste Media labels in the UK, the album was reissued on CD in 2006 in the UK on East West Records. Showbiz was reissued on double 12" vinyl under Warner in Europe and North America on the 18th of August, 2009 to commemorate the 10 year anniversary of the debut album.

A large number of different promo CDs were distributed across the world to promote Showbiz. The UK promo came screwed between two embossed perspex plates. Some copies came with a perspex spanner to undo the bolt on the screw. Muse had a box of spare spanners on their tour bus so that anyone with a promo but no spanner could retrieve one for from the band after gigs.

On the 4th of October, 2009 the muse.mu website announced that 3 lucky fans could win signed copies of Showbiz if they could guess what "rocker" tried to sign Muse sometime after Maverick did.

The winners were later revealed to be Luke McCarthy-Reed, Helen Fordyce and Dom Green. The answer was Serj Tankian.

Other US 4 track promo CD-R