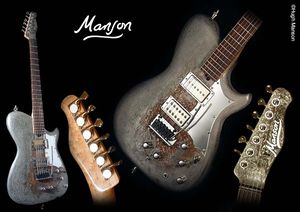 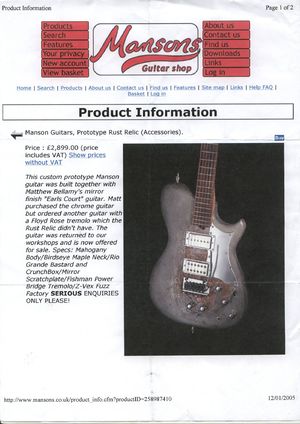 This was a custom prototype Manson guitar which was built together with Bellamy's Manson Mirror guitar.

Matt took delivery of both Guitars about a week before Earls Court, but returned the Rust Relic in early January. Bellamy purchased the Mirror, but ordered a Manson Chrome Bomber that had the Floyd Rose tremolo, which the Rust Relic didn't have, so the guitar was returned to the Manson workshop and was for sale to the public. In the end it was sold for £2,899.00.

This guitar has never been used at a gig & stayed original to when bought on 13th January 2005, apart from only face fret dots, which were added by Manson. It was owned by the original owner in the UK until August 2011 when it was sold to a buyer in the USA.