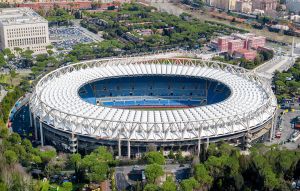 Stadio Olimpico (Olympic Stadium in English) is the main multi-purpose stadium and the largest sports facility in Rome, Italy. It was built for and is part of the Foro Italico sports complex (formerly named Foro Mussolini). The stadium was partially opened in 1933, and was known under it's former name, Stadio dei Cipressi (Cypress Stadium). The work operations were directed by engineer Angelo Frisa and architect Enrico Del Debbio. In 1937, the construction resumed but was interrupted in 1940 due to the outbreak of World War II. In 1950, the site was reopened for the stadium's completion, led by Carlo Roccatelli and continued by Annibale Vitellozzi after Roccatelli's death in 1951. It eventually fully opened in 1953 as Stadio dei Centomila (The Hundred Thousand Stadium). The stadium got it's name from it's (now former) capacity of around 100,000.

In 1960, Rome hosted the Summer Olympics, which led to the stadium being renamed to it's current name. The stadium capacity was brought down to 65,000 as the ground level seating had to be eliminated. The stadium was rebuilt once again in 1990 with capacity expanded to 82,911 for the FIFA World Cup when it hosted the final. The 1990 refurbishment was, once again, led by architect Vitellozzi joined by Maurizio Clerici. The construction took two years and football matches moved to Stadio Flaminio. Stadio Olimpico was fully demolished and rebuilt with reinforced concrete and all sectors were covered with a roof. In 2008, the stadium was refurbished again with improvements made in security systems, dressing rooms and the press room. The seats were replaced also and new LED screens were installed. The capacity was brought down to the current 70,634.

Currently, the stadium is primarily used for football games and is the home stadium of Roma and Lazio football clubs, and also hosts the Coppa Italia final. Apart from the 1960 Olympics and the 1990 FIFA World Cup, some major sporting events that the stadium also hosted include the 1974 European Athletics Championships, the UEFA Euro 1980, the 1996 UEFA Champions League Final, the 1975 Summer Universiade, the 1984 European Cup Final, the 2001 Summer Deaflympics and the 2009 UEFA Champions League Final. It is also scheduled as one of the stadiums of the UEFA Euro 2020 championship. Musical acts who performed at the stadium include Elton John, Miles Davis, U2, Roger Waters, Pearl Jam, Iron Maiden, Depeche Mode, Sting, The Cure and more.

In 2013, Muse filmed their fourth concert film at the site, titled Live at Rome Olympic Stadium, directed by Matt Askem and produced by Serpent Productions.