An interview with Christopher Wolstenholme in the December/January issue of New Zealand magazine Rip It Up.

TALES OF THE TRACKS 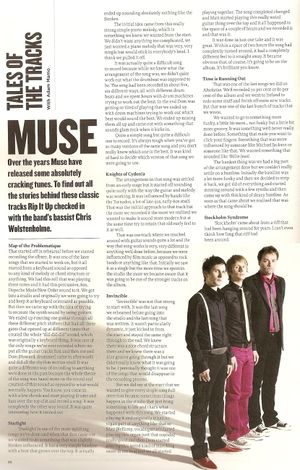 Over the years Muse have released some absolutely cracking tunes. To find out all the stories behind these classic tracks Rip It Up checked in with the band's bassist Chris Wolstenholme.

Map of the Problematique

That started off in rehearsal before we started recording the album. It was one of the later songs that we started to work on, but it all started from a keyboard sound as opposed to any kind of melody or chord structure or anything. We had this roll that was playing these notes and it had this percussive, 80s, Depeche Mode/New Order sound to it. We got into a studio and original we were going to try and keep it as keyboard orientated as possible. But then we came up with the idea of trying to recreate the synth sound by using guitars. We ended up running one guitar through all these different pitch shifters that had all these gates that opened up at different times that created the whole "did-did-did" sound, which was originally a keyboard thing. It was one of the only songs we've ever recorded where we put all the guitar tracks first and then me and Dom [Howard, drummer] came in afterwards and did all the rhythm section stuff. It was quite a different way of recording to anything we'd done in the past because the whole theme of the song was based more on the sound and creation of this sound as opposed to what would normally happen. You know, you come in with a few chords and start playing drums and bass over the top of it and record a song. It was completely the other way round. It was quite interesting how it turned out.

'Starlight' is one of the more uplifting songs we've done and when that first came out we wanted to do something that was slightly Strokes influenced. It has a very simple bassline with a beat that grows over the top. It actually ended up sounding absolutely nothing like the Strokes. The initial idea came from this really strong simple piano melody, which is something we knew we wanted from the start. We didn't want anything too complicated, we just wanted a piano melody that was very, very simple but would stick in everybody's head. I think we pulled it off. It was actually quite a difficult song to record because while we knew that the arrangement of the song was, we didn't quite work out what the drumbeat was supposed to be. The song had been recorded in about five, six different ways, all with different drum beats and we spent hours with drum machines trying to work out the beat. In the end Dom was getting so tired of trying that we ended up mixing them all up and came out with something that sounds glam rock when it kicks in. Quite a simple song but quite a difficult one to record. It's always touch when you've got so many versions of the same song and you don't really know which one is the best. It was kind of hard to decide which version of the song we were going to use.

The arrangement in that song was settled from an early stage but it started off sounding quite surfy with the way the guitar and melody was working. It was influenced by bands like the Tornados, a lot of late-50s, early-60s stuff. That was the initial approach to that track but the more we recorded it the more we realised we wanted to make it sound more modern but at the same time try to retain that old surfy feel to it as well. That was one track where we mucked around with guitar sounds quite a lot and the way that song works in very, very different to anything we'd done before, because we were influenced by film music as opposed to rock bands or anything like that. Initially we saw it as a single but the more time we spent in the studio the more we because aware that it was going to be one of the stronger tracks on the album.

'Invincible' was not that strong to start with. It was the last song we rehearsed before going into the studio and the last song that was written. It wasn't particularly dynamic, it just kicked in from the start and stayed the same right through to the end. We knew there was a nice chord structure there and we knew there was a nice groove going through it but we didn't really know what it was going to be. I personally thought it was one of the songs that would disappear in the recording process. But was did say at the start that we wanted to give every single song full attention because sometimes things happen in the studio that just bring something to life and that's what happened with this song. We started playing it and originally it had no organ part or anything like that so Matt [Bellamy, vocals/guitar] started playing this organ part that sounded really good and then Dom started playing this weird kind of marching snare drum beat and we all started playing together. The song completed [sic] changed and Matt started playing this really weird guitar thing over the top and it all happened in the space of a couple of hours and we recorded it and that was it. It was done in just one take and it was great. Within a space of two hours the song had completely turned around, it had a completely different feel to it straight away. It became obvious that, of course, it's going to be on the album. It's brilliant you know.

Time is Running Out

That was one of the last songs we did on Absolution. We'd recorded 70 per cent or 80 per cent of the album and we went to Ireland to redo some stuff and finish off some new tracks. But that was one of the last bunch of tracks that we wrote. We wanted to go to something more funky, a little bit more... not funky but a little more groovy. It was something we'd never really done before. Something that made you want to click your fingers. Something that was more influenced by someone like Michael Jackson or someone like that. We wanted something that sounded like 'Billie Jean'. The hardest thing was we had a big part of the arrangement done but we couldn't really settle on a bassline. Initially the bassline was a lot more funky and then we decided to strip it back, we got rid of everything and started messing around with a few synths and then came up with this kind of sleazy bassline. As soon as that came about we realised that was where the song should be.

'Stockholm' came about from a riff that had been hanging around for years. I can't even think how long that riff had been around. It was something that Matt used to play a lot in rehearsals. Matt started playing the riffs in between songs live and we all sort of kicked in for a little jam and we didn't really think anything of it. By the time we got back into rehearsals Matt had come up with the idea of what this song could be. Obviously we needed to be careful because it's such a metal riff. We had to be careful we didn't write a heavy metal song or something like that.

'Hysteria' was a track we'd been playing live for quite a while when we were doing Origin. We were in the UK in a sound shack and Matt was playing the riff on the guitar and we started playing around with it. We thought it would be really great as a bassline, which freed Matt up to come up with the more melodic stuff. We got the song to a point where we thought we could start playing it live, so we did, and it was great even though it hadn't been on any album. By the time we got into a studio the song had changed quite a lot and the arrangement changed even though the basics were still in the song. By the time it came out on an album a lot of people already knew the song.

Got that's going back a bit... I can remember we were rehearsing at Matt's house years ago and he came up with this Greek kind of squeaky-folksy sounding guitar melody and then we added a bassline and it sounded a bit funny at first. Dom started playing and we came up with this funny drumbeat to it and it just seemed to work. We had been playing this song live for years before Showbiz came out and way before we got a record deal and it was one of those songs that everyone commented on and said what a great song it was. It's really simple but with a flashy bassline and this Greek fold thing going on. It was quite different to anything that was around at the time and it was the first time that we'd done something that was quite unusual and outside of the realms of being in a rock band.

Falling Away With You

It's the only song we've ever recorded that we've never played live. I'm not quite sure why we don't. I think it's when we tried to play it live it never really seemed to work. It's strange because it came about from the live environment. We jammed it live once as an interlude to a song and it sounded really good. We tried to play it live a couple of times in sound shacks and it never really seemed to work. Maybe one day we'll get it out and brush off the cobwebs.

Go back to Rip It Up