An article and interview in the December 1999 issue of Record Collector. 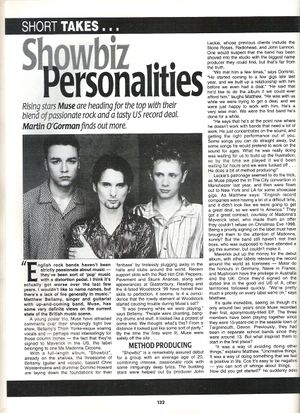 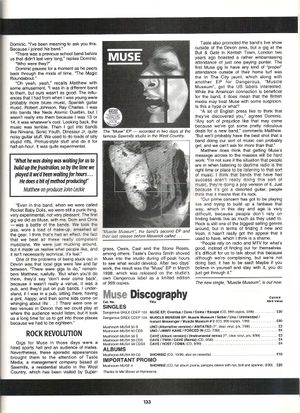 Rising stars Muse are heading for the top with their blend of passionate rock and a tasty US record deal. Martin O'Gorman finds out more

"English rock bands haven't been strictly passionate about music - they've been sort of 'pop' music with a distortion pedal. I think it's actually got worse over the last few years. I wouldn't like to name names, but there's a lack of fire generally in music." Matthew Bellamy, singer and guitarist with up-and-coming band, Muse, has some very definite views on the current state of the British music scene.
A young power trio, Muse have attracted comments over their shockingly tight live show, Bellamy's Thom Yorke-esque soaring vocals and - perhaps most interestingly for those column inches - the fact that they're signed to Maverick in the US, the label belonging to one Ms Madonna Ciccone.
With a full-length album, "Showbiz", already on the shelves, the threesome of Bellamy (guitar and vocals), bassist Chris Wolstenholme and drummer Dominic Howard are laying down the foundations for their 'fanbase' by tirelessly plugging away in the halls and clubs around the world. Recent support slots with the Red Hot Chili Peppers, Pavement and Skunk Anansie, along with appearances at Glastonbury, Reading and the ill-fated Woodstock '99 have honed their skills to perfection, it seems. Is it a coincidence that the rowdy element at Woodstock started causing trouble during Muse's set?
"It was brewing while we were playing," says Bellamy. "People were chanting, banging drums and stuff. It looked like a protest of some kind. We thought: what's this? From a distance it looked just like some sort of party." By the time the fires were lit, Muse were safely off the site ...

"Showbiz" is a remarkably assured debut for a group with an average age of 20, combining intense, passionate rock with some intriguingly deep lyrics. The budding stars were helped out by producer John Leckie, whose previous clients include the Stone Roses, Radiohead, and John Lennon. One would suspect that the band has been shoved into the studio with the biggest name producer they could find, but that's far from the truth.
"We met gun a few tunes," says Dominic. "He started coming to a few gigs late last year, and we built up a relationship with him before we even had a deal." "He said that he'd like to do the album if we could ever afford him," laughs Matthew. "He was with us while we were trying to get a deal, and we were just happy to work with him. He's a very wise man. We were the first band he's done for a while.
"He says that he's at the point now where he doesn't work with bands that need a lot of work. He just concentrates on the sound, and getting the right performance out of you. Some songs you can do straight away, but some songs he would pretend to work on the sound for ages. What he was really doing was waiting for us to build up the frustration, so by the time we played it we'd been waiting for hours and we were fucked off... He does a bit of method producing!"
Leckie's patronage seemed to do the trick, as Muse played the In The City convention in Manchester last year, and then were flown out to New York and LA for some showcase gigs. As Matthew says: "English record companies were having a bit of a difficult time, and it didn't look like we were going to get a great deal, so we went to America." They got a great contract, courtesy of Madonna's Maverick label, who made them an offer they couldn't refuse on Christmas Eve 1998. Being a priority signing on the label must have brought them to the attention of Madonna, surely? But the band still haven't met their boss, who was supposed to have attended a gig this summer, but couldn't make it.
Maverick put up the money for the debut album, with other labels releasing the record around the world as licensees - Motor do the honours in Germany, Naive in France, and Mushroom have the privilege in Australia and the UK. Once they'd signed on the dotted line in the good old IS of A, other territories followed quickly. "We're pretty much a priority on every label we're on," says Matthew."
It's quite incredible, seeing as though it's only around two years since Muse recorded their first, eponymously-titled EP. The three members have been playing together since they were 15-years-old in the seaside town of Teignmouth, Devon. Previously they had been in separate school bands since they were around 13. But what inspired them to start in the first place?
"It was a way of avoiding doing other things," explains Matthew. "Uncreative things. It was a way of doing something that we feel is positive in life. Cos it's easy to be negative - you can sort of whinge about things... How did you get started?" he suddenly asks Dominic. "I've been meaning to ask you this. Because I joined his band."
"There was a previous school band before us that didn't last very long," replies Dominic.
"Who were they?"
Dominic pauses for a moment as he peers back through the mists of time. "The Magic Roundabout."
"Oh yeah, yeah," recalls Matthew with some amusement. "I was in a different band to them, but ours wasn't as good. The influences that I had from when I was young were probably more blues music, Spanish guitar music. Robert Johnson, Ray Charles. I was into bands like Neds Atomic Dustbin, but I wasn't really into them because I was 13 or 14, it was whatever's cool. Looking back, the music was terrible. Then I got into bands like Nirvana, Sonic Youth, Dinosaur Jr, quite noisy guitar stuff. We used to do loads of silly stupid riffs, Primus-style stuff and do it for half-an-hour. It was quite experimental.
"Even in this band, when we were called Rocked Baby Dolls, we were still a punk thing, very experimental, not very pleasant. The first gig we did as Muse, with me, Dom and Chris - was a battle of the bands. We took the piss, wore a load of make-up, smashed all the gear. I think that's had an effect, the effect that we beat all these really competent musicians. We were just mucking around, but it made us realise what people like, and it isn't necessarily technical, it's feel."
One of the problems of being stuck out in Devon was that local gigs were few and far between. "There were gigs to do," remembers Matthew, ruefully. "But when you'd do them, they'd say 'don't ever come back', because it wasn't really a venue, it was a pub, and they'd put on pub bands. I understand, if I was in a pub, sitting there, having a pint, happy, and then some kids come on whinging about life..! There were one or two venues in Devon that we could play at where the audience would listen, but it took us a long time for us to get into those places because we had to be eighteen."

Gigs for Muse in those days were a hired sports hall and an audience of mates. Nevertheless, these sporadic appearances brought them to the attention of Taste Media, a management company based at Sawmills, a residential studio in the West Country, which has been visited by Supergrass, Oasis, Cast and the Stone Roses, among others. Taste's Dennis Smith shoved Muse into the studio during off-peak hours to see what would develop. After two days' work, the result was the "Muse" EP in March 1998, which was released on the studio's own Dangerous label as a limited edition of 999 copies.
Taste also promoted the band's live show outside of the Devon area, but a gig at the Bull & Gate in Kentish Town, London two years ago boasted a rather embarrassing attendance of just one paying punter. The first Muse gig to have any kind of "proper" attendance outside of their home turf was the In The City jaunt, which along with another EP for Dangerous, "Muscle Museum", got the US labels interested. While the American connection is beneficial for the band, it does mean that the British media may treat Muse with some suspicion. Is this hype or what?
"A lot of English press like to think that they've discovered you," agrees Dominic. "Any sort of prejudice like that may come because we've got some pretty ridiculous deals for a new band," comments Matthew. "But we'll probably have the best shot that a band doing our sort of music can probably get, and we can't ask for more than that."
Matthew does think that getting Muse's message across to the masses will be hard work: "I'm not sure if the situation that people are in when listening to daytime radio is the right time or place to be listening to that sort music. I think that bands that have had success aren't really doing this sort of music, they're doing a pop version of it. Just because it's got a distorted guitar, people think that it means that it's rock.
"Our prime concert has got to be playing live and trying to build up a fanbase that way, which in this day and age is very difficult, because people don't rely on finding bands live as much as they used to. Rock is still one of the biggest selling genres around, but in terms of finding it new and fresh, it hasn't really got the appeal that it used to have, which I think is a shame.
"People rely on radio and MTV for what's good, instead of finding out for themselves. It's difficult for us to talk about this because although we're complaining, but we're not doing bad, it has to be said! Maybe if you believe in yourself and stay with it, you do just get through it."

Go back to Record Collector