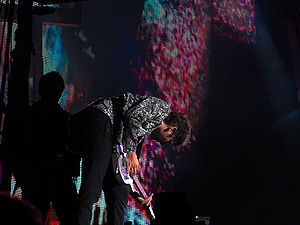 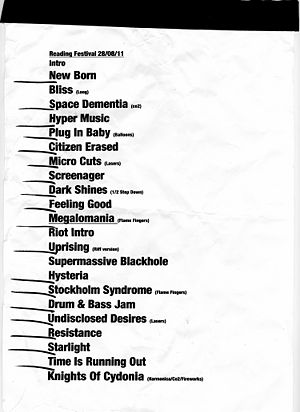 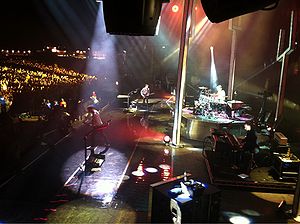 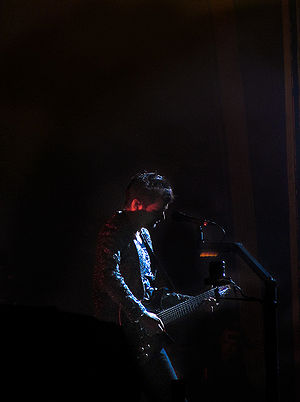 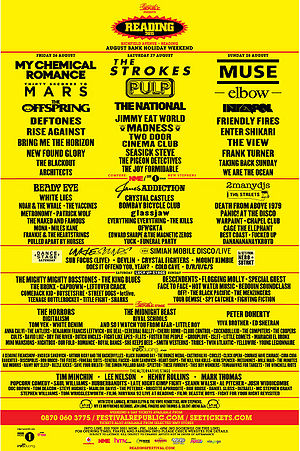 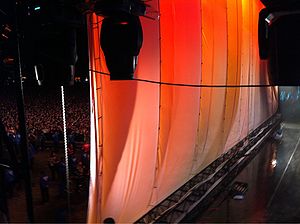 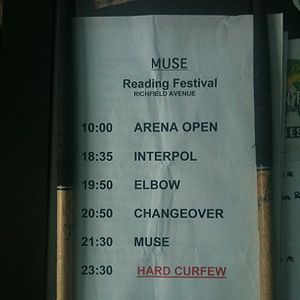 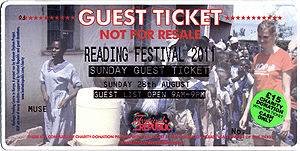 Muse performed for Reading and Leeds Festivals 2011 as headliners.[1][2] Muse had originally intended to end the Resistance tour in 2010.[10] Upon being offered to headline Leeds and Reading festivals, however, the band decided to continue touring.[10] The first substantive rumours of Muse appearing at the festivals began in January with VirtualFestivals including Muse among its headliner predictions, while implicitly claiming inside knowledge.[11] Morgan Nicholls purportedly stated during the NME Awards that the band would be performing.[source?]

From the point of accepting the headline slot, the band didn't wish for the the festivals to be part of the Resistance tour.[10] After the band pondered how to differentiate the occasion, Matthew Bellamy recalled that it was the tenth anniversary of Origin of Symmetry's release, and suggested that the album be performed during the festivals.[10]

The Muse website in mid-March announced that Muse would be headlining the festivals, as a renaissance of sorts for Origin of Symmetry, including songs from across their "career[s] to date".[1] Showbiz and pre-Showbiz works of the Muse repertoire were not included within "career". Said announcement also stated that a stage different from those used on the Resistance tour would be used.

Bellamy later said on his twitter account that the band will "probably play Origin in its entirety" at the two festivals.[12] In mid-August Christopher Wolstenholme confirmed that the entire album would be performed, while the band's intention was for it to be performed in order.[10] Wolstenholme claimed that five songs which hadn't been performed for a long time were causing the trio to worry, including Darkshines and Screenager.[10]

From the 15th of August,[13][note 1] Muse rented LH2 Studios[14][15] on Concord Road, London, in order to rehearse and test the stage design.[13][14][15][note 2] Photographs from their time there were uploaded by various members of Muse's touring crew, some of which unveiled the stage design publicly[16][17] for the first time. The stage and equipment were packed by the 24th, ready for transfer to the Leeds[18] Festival site in Bramham Park.[note 3]

Two competitions were held for single pairs of tickets. The first asked for Muse t-shirt designs and the winning design was chosen by the band.[19][20][21] The second was a Muse forum popular poll for ideal Muse performance venues.[22] The former was for Reading Festival only,[19][20][21] while the latter was for either Reading or Leeds.[22]

For the performance itself, the "What's He Building" intro was used, for the first time since the Origin of Symmetry tour. A single curtain was lowered several minutes before the intro, and during it flashes of light behind band members revealed their shadows on the curtain, visible to the crowd and relayed on the side-screens. These flashes were synchronised to sounds in the intro track.

Once What's He Building had finished, Bellamy began the piano intro to New Born.[23] After said intro, he rose and walked to the stage-front, at which point the curtain was raised and his finger pointed upward in standard New Born teaser fashion.[23] For the beginning of Bliss, Bellamy triggered a synthesiser intro via his integrated Kaoss Pad, rather than play the arpeggios on guitar. The synthesiser intro appeared on the album and had been performed for some Absolution-era gigs[note 4] and Leeds Festival, while the latter had been used for both the Black Holes and Revelations and The Resistance tours gigs.

The end of Space Dementia saw the return of the guitar outro, which had been used in 2006 as an outro to Knights of Cydonia. An example of such use as an outro can be found on the BBC television recording of Reading Festival 2006. For Hyper Music, Wolstenholme sang the choruses in place of Bellamy, though with vocal effects applied to sound more similar to the latter. Eyeball balloons were released during Plug In Baby,[4] which were mostly blown to the stage's right side by the wind.[note 5]

For Micro Cuts, lasers were used.[4] Before the descending riff, Bellamy teased with falsetto "whimpering" sounds, but came the time, he stepped away from his microphone and neglected to sing. Darkshines was transposed a semitone down,[4] which fans on forums speculated as having been done to make the vocal part easier[source?]. Note that this has been done to other songs in the past, including Fury and Starlight.[source?]

As was the case at Leeds Festival, flame throwers in the shape of a hand, named "flame fingers" on the set-list,[4] were used during Megalomania choruses.[4] The flame-throwers were visibly shorter than at Leeds,[24][25] however, due to portions of the stage having been melted by them.[25] These flame-throwers were also used during Stockholme Syndrome.[4]

For the finale, a fireworks display was set off[4] at the end of Knights of Cydonia, during which[note 6] an extended drum solo was performed. Howard proceeded to thank the crowd and tell them that they were "fucking amazing" as usual, but did so in a more enthusiastic and lengthy manner.

This was also the last known performance of Screenager, Darkshines, and Megalomania.

Sp@ceH made a recording, which can be obtained here[registration needed].