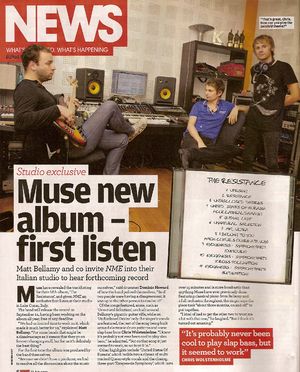 Muse have revealed the tracklisting for their fifth album, 'The Resistance', and given NME an exclusive first listen at the studio in Lake Como, Italy.
The Band will release the record on Sept 14th, having been working on the album all year, free of any deadline.
"We had unlimited time to work on it, which made it better for us," explained Matt Bellamy. "For some bands that might be a disadvantage as it means they go on forever changing stuff, but for us it's definitely the best thing."
For the first time the album was produced by the band themselves.
"Because we didn't have a producer, we had to resolve all the discussions about the music ourselves", said drummer Dominic Howard of how the band policed themselves. "So if two people were having a disagreement it was up to the other person to resolve it!"
Of the songs featured, some, such as "Unnatural Selection" are built around Bellamy's Gigantic guitar riffs, while on "Undisclosed Desire" [sic] only the singer's vocals are features, the rest of the song being built around electric drum patterns and some slap bass from Chris Wolstenholme. "I Know it's probably not ever been cool to play slap bass," he admitted, "but on that song it just seemed to work so we kept it in."
Other highlights include "United states of Eurasia", which builds into a climax of multi-tracked Queen-style vocals and the closing, three-part "Exogenesis Symphony", which lasts over 15 [sic]† minutes and is more bombastic than anything Muse have ever previously done. Featuring classical piano from Bellamy and a full orchestra throughout, the singer says the piece took "about three months, on and off" to put together.
"I Kind of had to get the other two to trust me a bit with that one," he laughed. "But I think it's turned out amazing."

†Exogenesis Symphony is under 13 minutes long.