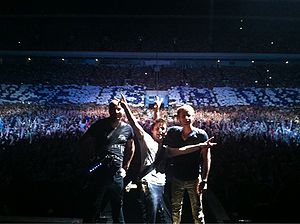 Muse in front of the crowd's phrase

Megalomania was played for the second time in 2011, following the Saint Petersburg concert two days before, which had a similar set-list.

"Muse is in our hearts"

As Matthew Bellamy started playing the House of the Rising Sun instrumental, Dominic Howard noticed that fans on the tribunes had covered themselves with white and blue sheets of paper, which together formed the phrase "Muse is in our hearts". The trio had a photograph of themselves, with the phrase in the background, taken using Bellamy's iPhone. Howard mentioned that he would post the photograph on Twitter, which he did within an hour after the gig.[6][7]