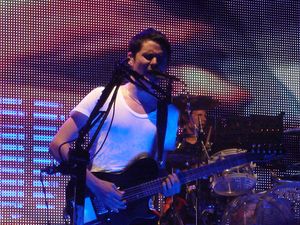 During Muse's sound-check an instrumental performance of Map of the Problematique could be heard, as well as Entrance of the Gladiators, portions of Hoodoo and assorted piano improvisations.

During pauses between songs, the audience would chant "Drum solo!" to which Matthew Bellamy replied "He's shy." while pointing at Dominic Howard.

During New Born, a fan threw a shirt on stage that happened to land on Bellamy's strumming hand during the riff after the piano solo. He proceeded to swing it around over his head before throwing it back into the crowd.

Due to the location's difficult access via public transit and the small amount of ads/promotions in the Greater Toronto Area the show was not a sell out (unlike Muse's last three shows in Toronto).

During the show Bellamy had technical difficulties with the Wah-pedal on his piano, to ease the crowd he started playing "Entrance of the Gladiators" also known as "Thunder and Blazes" (the song commonly played played for clowns at a circus). A fan yelled out for Bellamy to play the song anyways to which he replied, "It's not the same without the wah-wah.". Balloons were released during Plug In Baby. During a few of the songs, towers of dry ice were blasted into the air and helped cool everybody down. During Butterflies & Hurricanes, the dry ice tower on the far left side of the stage (by Chris) malfunctioned and fired into the crowd instead of upwards. However, no one was hurt.

A high quality recording can be found here and also here[registration needed].