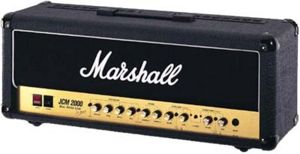 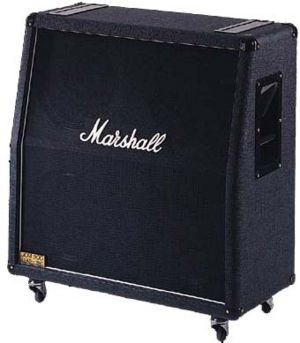 The head is a DSL 100 amplifier with two footswitchable channels (Classic and Ultra). Furthermore, each of these channels boasts two modes: the Classic channel offers a Clean / Crunch option while the Ultra offers Lead 1 or Lead 2. With this head, Matt uses two 4x12 cabinets. He particularly likes the limited edition Orange Crunch version.

Matthew Bellamy used to use a Marshall JCM2000 DSL-100 with two 4x12 angled cabinet before his current Diezel VH4 Rig. One is usually placed side stage mic'd up and the other is placed onstage, which is used for feedback. He in fact appears to have two amp heads which are both kept to the side. It is likely that one is a backup.

Matt on his Marshall setup: "I just use a two-channel amp, one full on. A lot of people switch between channels for crunch sounds or clean sounds but I tend to stick to one channel 90% of the time, which is volume on full, with the gain really low. You get this really attacking, clean sound which I use quite a lot."[source?]

Matt generally on Marshall amps: "We use Marshall because when we jump on them they still work, and they sound good... real good!"[source?]

The model discussed here is not to be confused with the DSL 100H amplifier head, re-launched by Marshall in 2012.[1] In addition to some functional and technical differences between the original JCM2000 version launched in 1997[2] and the newer version, the latter does not use the JCM2000 designation.

Go back to Marshall