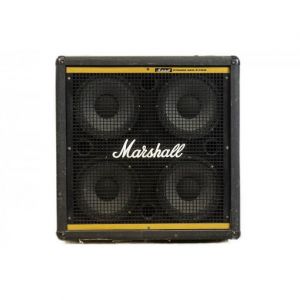 The Marshall 7410 is a now-discontinued bass cabinet from the 7000 Dynamic Bass System series, produced by Marshall in the 90s. The 410 stands for the cabinet's speaker arrangement; 4x10.

The 4x10 7410 Bass Cab was first used live during the Origin of Symmetry era, since 2000. Chris paired the cabinet with either another 1x15 or the 2x15 7000 series cab, two Marshall DBS 7400 bass heads, and the Marshall B150 bass combo amplifier, which sat on top of his amp rack. Other cabinet combinations were also seen sometimes.

The 7410 was commonly mistaken during The Resistance era for being the Mills 410B 4x10 Bass Cab. Wolstenholme replaced the Marshall cabs for Kemper Profilers and Markbass cabs in 2012, however they are still occasionally used in the studio.