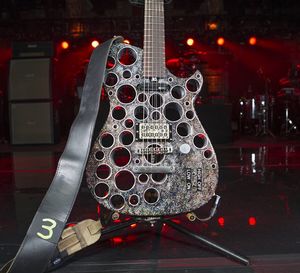 This is one of several new guitars that Matt Bellamy started using live for the 2015 Summer Festival Shows and the pre-360 Tour shows in South America and Asia. Built by Hugh, the guitar is a duplicate of the original Silver Glitter Holes. Likewise, it's design and finish was inspired Hugh's trip to the Sagrada Familia Cathedral in Barcelona, Spain in 2014. However, unlike the original, it has different positions of holes and a chrome bridge pickup, aswell as only one control knob. It is a live duplicate for either 'Rig A' or 'Rig B'.

This guitar was first seen at the 2015 Rock Werchter gig and has last been seen used at the 2015 Bogota gig. It was numbered number "3" by Matt's guitar tech.

This guitar was also the last guitar played by Matt on Starlight.