This is a series of almost identical Manson guitars that Matt has been using since March 2015. Like all 2015 guitars built by Manson's, these guitars feature a truss rod adjuster that is placed just below the end of the neck and a slightly different bridge compared to the old Matt Blacks. Matt has been throwing these guitars around quite a bit during the Drones world tour, so many of these guitars now have scuffs, dents, and some even more than that! 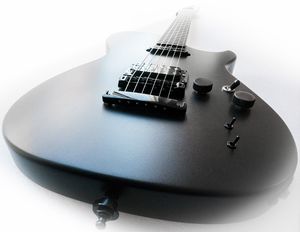 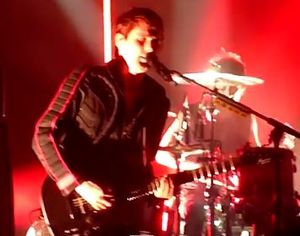 This guitar is exactly the same like the Matt Black 2.0 #1 & #2, except it features black hardware and anodised black custom knobs and machineheads.

At some point around mid-2015 this guitar got a new neck that has the new Manson logo instead of the old one, and features blackened normal tuning pegs and silver truss rod adjusters.

It also appears that some time before the La Cigale gig, Matt got the Sustainer replaced with a Sustainiac and installed a Fishman TriplePlay Guitar Synthesizer Driver on the guitar for 2018 performances of The Dark Side and subsequently Pressure and one performance Plug in Baby. He later ditched the guitar for a Manson Prophet Stealth.

This guitar first appeared at the Belfast Ulster Hall on the opening night of the 2015 Psycho Tour. It was used for songs tuned down half a step from standard tuning (Eb tuning).

After this guitar was initially for Rig A, it was seen back in Rig B (Europe Rig) for the Le Grand Journal show in 2015, and also appeared during festival shows. 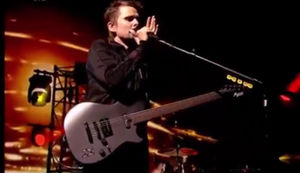 These two guitars are exactly the same as the #1, except that they feature a Sustainiac instead of a Fernandes Sustainer.

At some point during the The Drones World Tour 2015/16 both guitars got new necks with standard tuners instead of the custom machineheads. Both guitars feature the old Manson logo.

One of these two guitars was damaged by Matt at the O2 Arena show in London on 15th April 2016, and then auctioned by the Helen Foundation.

Both guitars were first used at the BBC Radio 1’s Big Weekend gig. 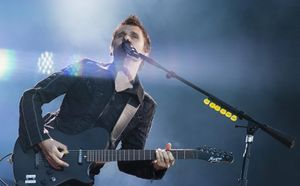 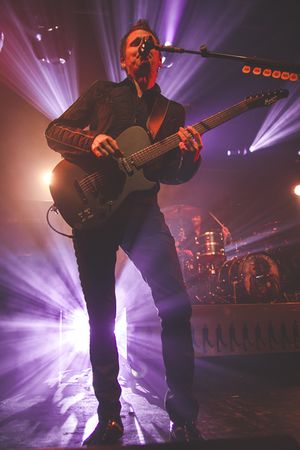 These two guitars are a bit different to #1, #2 and #3. They feature a Sustainiac, a silver truss rod adjuster, black custom tone and volume knobs, and standard blackened tuning pegs. They both have the new Manson's logo on the headstock.

The #4 has white stickers for the controls of the sustaniac, whereas the #5 has black stickers. 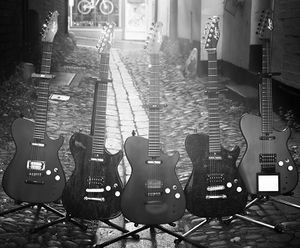 These two guitars are nearly the same as the #4 and #5. Only the knobs are silver instead of black, and the truss rod adjuster is black instead silver. Both feature the new Manson logo on the headstock.

Both guitars were delivered with the two Manson Holoflake guitars and the Manson M1D1 Stealth #2 guitar in October 2015.

Both guitars debuted at some point during the first part of the Drones World Tour 2015/16.