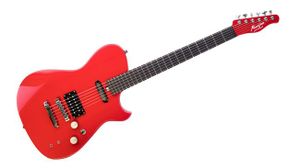 This is one of the four new Matt Bellamy Signature Guitars built and released by Manson Guitar Works in 2017. It is called the MB-1RA (RA being short for Red Alert). It is an edition of Matt's current touring guitar, the Manson Red Alert, named after it's distinctive bright red finish. As with all Matt Bellamy custom Manson guitars, this is a limited edition, with the build time of 12 months.

The guitar is very similar to the specs of the DR-1 signature guitars, only difference being the color and the body wood.

Starting price of the Red Alert is £3799. Standard machineheads included is Gotoh's HAP. Hardware is upgradable to the custom knobs and machineheads.