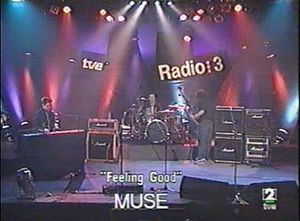 A performance for Spain's Radio 3 before their performance at the Festimad later the same day.[1]