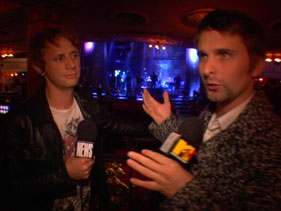 Muse at the 2009 VMA rehearsals

NEW YORK — The sign outside says "Muse — One Night Only!!!" Inside, it seems the band hasn't gotten the memo. Twenty-four hours before their performance on Sunday's MTV Video Music Awards, the British rock trio is literally shaking the dust off the walls at a Broadway theater as they tear into a cut off their upcoming album, The Resistance. It's a rehearsal in name only.

Come show night, Muse will make their American TV debut with a performance of " Uprising." But the lucky chosen here will be treated to an entire set of tunes — as many as 12 in total.

"They're such an immense rock band," said VMA executive producer Jesse Ignjatovic. "The idea of putting a rock band of that scale in a small Broadway theater ... of their fans, because their fans are super-loyal, that excited me."

Following the rehearsal, Bellamy and drummer Dominic Howard chatted with MTV News about the wicked staging they have planned for the evening, which includes a backdrop featuring an enormous teddy bear busting through the stage floor and a crazy light show. The band is pumped to be in New York to bring their super-loud sound to millions.

Muse's practice caps a stellar day of VMA rehearsals, from Lady Gaga's top-secret performance to the hard-charging live set from show vets Green Day. It's all in raucous preparation for the big show on Sunday night, starting at 9 p.m. In addition to Muse, Gaga and Green Day, you're gonna get killer tunes and sick theatrics from Taylor Swift, Pink, Jay-Z, Beyoncé and more.

Watch the 2009 MTV Video Music Awards Preshow this Sunday, September 13, at 8 p.m. ET, followed by the big event, live at 9 p.m. Check out our interactive map of New York to see how the city is celebrating the VMAs all week long, and stay tuned for party coverage, concert reports, behind-the-scenes updates and more.