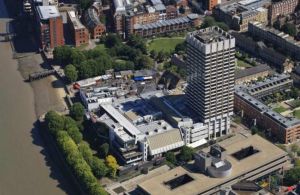 The London Studios, also known under names The South Bank Studios, The London Television Centre, ITV Towers and Kent House, originally owned by London Weekend Television, was a TV studio complex owned by ITV plc. The complex was located in Waterloo, Central London on the South Bank next to the IBM Building and the Royal National Theatre. The London Studios closed in April of 2018 and moved into BBC Studioworks' facilty, BBC Television Centre, where most ITV programmes are now filmed.

The building was opened for transmission in 1972, constructed by Higgs and Hill. It became fully operational in 1974 and was originally called The South Bank Television Centre and was the most advanced television centre in Europe at that time. ITV bought the freehold of the now renamed London Television Centre in 2013. Soon after, on social media, the building was named to ITV Towers. After ITV's move in 2018, the building was initially closed for demolition but ITV intended to redevelop the facilty with three small studios. However, later in that year, ITV announced it would not be returning to the facility and the whole site would be developed into premium housing. In 2019, the building was sold by ITV to Mitsubishi Estate London.

The London Studios was the main home of ITV. Shows filmed at the facilty included Good Morning Britain, The Graham Norton Show, The Jonathan Ross Show and more. Other programmes from channels including BBC Television and Channel 4 were also filmed in the building.

Muse appearances at The London Studios