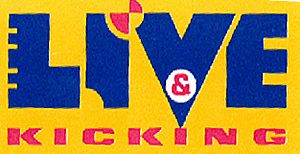 Muse were introduced by Trey Farley to play New Born. "They've been called the 'Fixed Penalties', 'Black Plague', which is very very cheery isn't it, and they have been called 'Rocket Baby Dolls', but now they are just called 'Muse' and have been around since 1994. Please give it up, its a brand new single its called "New Born", this is Muse!"

Matthew Bellamy has black hair and is wearing black sunglasses. Muse were were told by the TV show to mime to a shortened version of the song, cut from the second verse to the final chorus. As the band are miming, Dominic Howard and Christopher Wolstenholme switch instruments, while Bellamy doesn't attempt to play his guitar or keyboard throughout most of the song. He does a bit of a break-dance during the final riff, spinning on the floor. The performance ended with Bellamy and Howard tangled up on the floor while Wolstenholme destroyed the drum kit.

You can read more about the performance and the show here