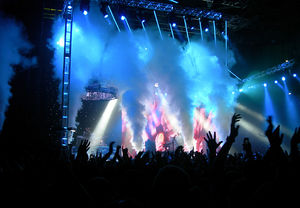 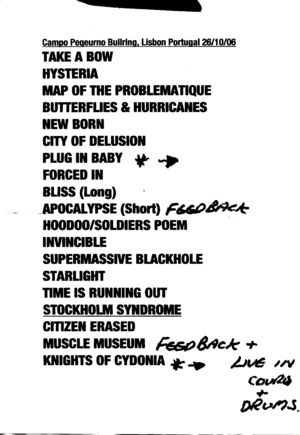 Tickets went on pre sale on 16th August through Ticketline and on general sale on the 17th. The show was announced by muse.mu.

The "I Want to Break Free" instrumental lasted for about 2 minutes.[4]

Before "Starlight" started, Bellamy said "A música seguinte chama-se Starlight" ("The next song is called Starlight") in Portuguese.[5]

A recording of "Supermassive Black Hole" from this performance is the B-side for "Knights of Cydonia".[6][7]

A bootleg was recorded using a Sony MZ-N910 MiniDisc recorder and Aiwa microphone.[8] This was uploaded to Dime a Dozen in FLAC format here. The bootleg was later transcoded to mp3 and uploaded to Muselive.com, available here.

SOUSOUS also recorded part of the performance using a MiniDisc recorder. This was initially available from an unlinked directory on his website, and later uploaded to Muselive.com.