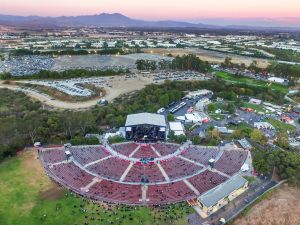 Due to the lease not being renewed, in 2016, the amphitheatre was closed and demolition started in November of the same year. The Irvine Company chose to build a 3,700-unit housing development on the site. As a result, in 2017, Live Nation and FivePoint built a temporary amphitheatre at the Orange County Great Park named FivePoint Amphitheater for a limited term of 3 years.

Musical artists who have performed at the Irvine Meadows Amphitheatre include Michael Jackson, Tangerine Dream, Rush, Tom Petty and the Heartbreakers, Miley Cyrus, Fall Out Boy, Ozzy Ozbourne (who recorded a performance called Speak of the Devil), and more. Festivals that took place on the site include Area2 Festival, Uproar Festival, Lollapalooza, KROQ Weenie Roast Y Fiesta, and more. In 2016, Bernie Sanders hosted a rally at the venue. Gwen Stefani was the last performer for the amphitheatre before it was demolished.