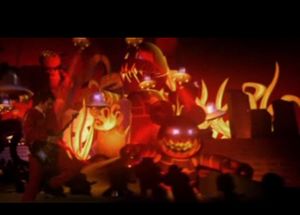 The video starts by showing the band in a boat, going through a "It's a Small World" or "Charlie and the Chocolate Factory"-like ride that appears to go through the history of the world; starting the stone-age, the band moves on through various wars and notable events in history. The animation style is said to resemble Lego-block people and flat, cardboard or wooden creatures. Near the end, all of the events run together, and an apparent end of the word scenario begins around them including numerous yellow twisters, giant robotic teddy bears with multiple rows of teeth destroying buildings and UFO's swarming the city, with the humans fighting back. The video ends with a shot of a caveman and woman looking to themselves and the band on their boat riding out of the other end of the tunnel and the massive brightly-colored door closing behind them.

Go back to Invincible