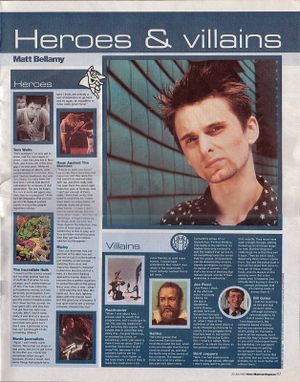 He's someone I've only got to know over the last couple of years. I saw him play live in New York, and it was one of the best gigs I've ever seen. While we were making our album, John Leckie turned us on to him. Him and Captain Beefheart. But with Tom Waits, it's really been the first time I've had that level of admiration for someone of that generation. The way he keeps his cool such old age is very sane. Has he inspired us? I think he's an inspiration that you can go on and make important music that touches people regadless of ages.

I never had the comics myself, but my older brother had lots of stuff like that when he was younger, and I picked them up off him The Hulk is like this schizophrenic weirdo, but he's generally good-hearted. Even when he's lost of control, he's still got his instintes towards justice. And I liked his hair, as well. He had green skin, and blue hair, I've got blue hair right now, actually. Why? I don't know, really, it was kind of sour-of-the-moment thing. It doesn't even look very good, but I don't care. I got bored off my hair, so I just thought I'd do something different.

Rage Against The Machine

They're so pure, you know? I've know them since they first came out, and they were the first band that crossed metal with rap, and do it really well. I've seen them live about eight times this year, at festivals and I can't get enough of them, really. I think their purity, their belief in what they do, makes them seem so untouchable. At festivals, there are all these other bands - I mean, I don't want to name names, but you know what I mean - who [...] up backstage and get fucked [...] on drugs, really out of it. But Rage Against the Machine, they arrive at these gigs minutes before they're due to play, and they just blow everything away, then they got back in these vehicles and disappear.